A short peek behind the scenes of the filming and recording of 'Aftermath':

Here's some new music and a new video. And I must admit, that it has been a long time in the making, as I started work on it back in march 2020.
But now I can finally present: 'Aftermath'.

Apart from music and film making, I am also very interested in both nuclear physics and urban exploration. All these four interests meet in 'Aftermath' which is a piece of music I originally created for a short film I did at the Chernobyl Nuclear Power Plant in Ukraine. After I finished the short film, I felt that I had not finished working with the atmosphere that had been present during the visit. So I spend some time further developing the music, adding chord sequences and dynamics. In the Chernobyl zone a lot of people referenced the book 'Roadside Picnic' by the Strugackij brothers while trying to pin the mood. I read the book and knew I wanted to do something about an alien zone. So I asked actor Veronica Walther Dam Jensen to put on a uniform and walk around the Værløse Air Base north of Copenhagen. After the filming I watched 'Blade Runner 2049' and instantly knew what color tone the music video should be. And then the production halted. I struggled with the lyrics and had no idea about the melody. A year and a half later I met russian artist Anna Richter and we decided to have an improvisational session at the Big Tower at Christiansø - a former sea fortress and canon tower, now a light house and museum - and the piece finally came together.

It's only two short months since I published the music and video for 'Substance 25', and now I'm ready with some more new music and film.

In the small harbour town of Hundested (the name roughly translating to Dogville), Denmark, there is an inn looking like something out of a historic movie. When I heard rumours about the place being haunted, I knew I had to make a film about it.

Finally there's new music!
This time featuring the voice talent of Martin Kramer, backing vocals by Tanja Hollerup, keyboards by Klaus Schønning, drumming by David A. Jeppesen and bass by Jesper H. Petersen.
There is also a music video made for the song featuring Nicolai Hedelund as 'The Scientist' doing experiments filmed at Laborantskolen i Slagelse courtesy of Tue B. Petersen.

Disclaimer: Neither I nor MusicVenture endorses the use of LSD as an intoxicant drug, and we have no opinion on LSD's possible medical uses. The song 'Substance 25' and its music video is neither for nor against LSD, but relate exclusively to two historical events.

There is an urban legend in the world of synthesizers that Don Buchla, the inventor of the first modular synthesizer system, had dipped one of the synthesizer's panels in LSD, so one could get more inspired while turning knobs. I had known about this legend for years when I stumbled upon a news article about an engineer called Eliot Curtis, who was asked to repair an old Buchla synthesizer that had been locked away in storage for ages in the vaults of California State University in San Fransisco. While cleaning the old electronic circuits, he suddenly felt a strange tingling and a pleasant dizziness, and it turned out that he had just confirmed the urban legend about the trippy panel.
I thought it was such a strange story, that I immediately wrote a song inspired by it. I drew on a lot of nostalgia from 1967 and used references to early Pink Floyd, The Beatles, Hendrix and Morton Subotnick.
While I worked on the song, a question came up: What is LSD at all? So I googled it and found an equally fantastic story. This time about the Swiss chemist Albert Hofmann, who was the first to synthesize LSD - and the first to try it. Hofmann suspected that the 25th variation of the synthesized substance might be a very potent drug for treatment of mental disorders. On April 19th 1943, Albert Hofmann ingested a dose of Lysergic acid diethylamide-25, after which he rode his bike home. During the bike ride, he experienced the world's first acid trip.
I was stunned. Now I had two stories to tell about the same subject. My solution was to have the song be about the Buchla synthesizer, and then create a music video about Albert Hofmann's bicycle ride.

On the last day of february 2021, six danish musicians joined forces to perform six short sets from six different locations all streamed on the same channel under the banner 'Lydstrejf #1'.
I performed as the fouth act, playing four songs from my concept album 'Thaw'. 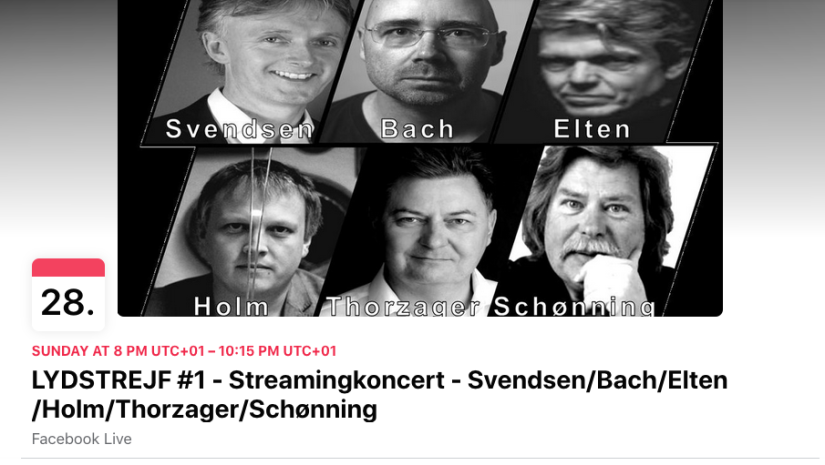 The concert is free to attend.