The other day was quite busy in the studio. Both Edith and Tonny came by to record some noise.
First and foremost we did a cover of Joan Javits' Santa Baby from 1953 which has also been covered by Kylie, Spears and Madonna... What a company.

Our version features Tonny on keyboards, Edith on vocals and me on guitar, percussion and backing vocals.
The result is an uptempo, but rather loose version. I like it...

After Tonny left, Edith stayed to record two more songs. One was a cover of Walking in the Air from the 1982 cartoon 'The Snowman'. The other was cue-vocals for a new track of mine called 'Whiteout'.

Edith listening to the pre-mix - does she like what she's hearing?

Nov 16 2010 9:22 PM
A new toy...
Last week I picked up my new guitar, a used Les Paul shaped Hagstrom Ultra Swede, which despite the name is actually produced in China. Hagstrom is probably the most succesfull scandinavian guitar manufacturer ever, with production dating back to the 1930ies. Unfortunately they closed down in 1983, and since then their guitars has been sought after collectors items. The brand was relaunched in 2004 with production in China rather than its native Sweden. The guitar I bought is from 2008.
I bravely resisted the temptation of plugging it in and treating it with some sweet rock’n’roll, because I feared that hearing it as it is might provide me with second thoughts.
I bought it with the Fernandes Sustainer system in mind, and that meant I had to do things to it that I never thought I would do to any guitar. 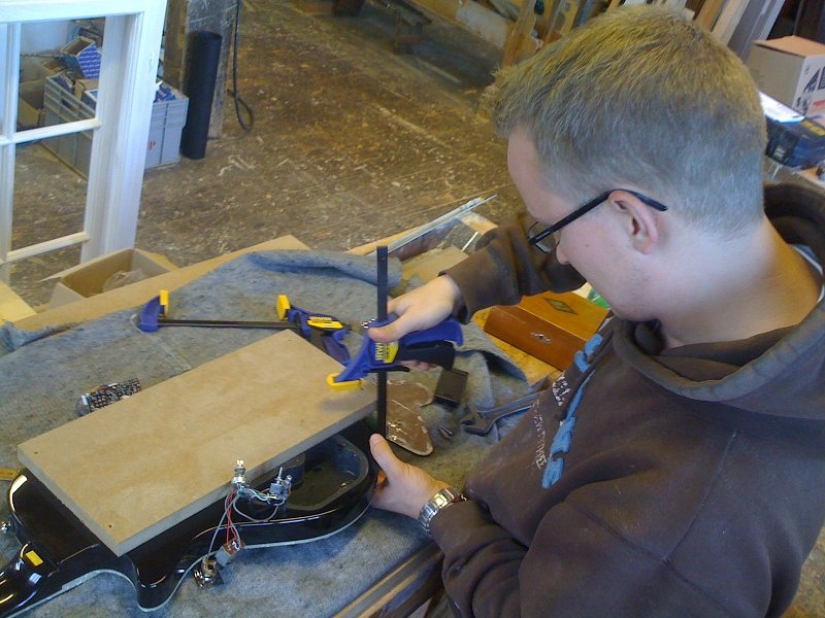 For that job I went to see my friend Bjørn, a skilled woodcutting machinist. Watching him work on the guitar with sawdust flying around, was a nerve wrecking experience. Bjørn however, is very good at what he is doing, and he did a beautiful job. 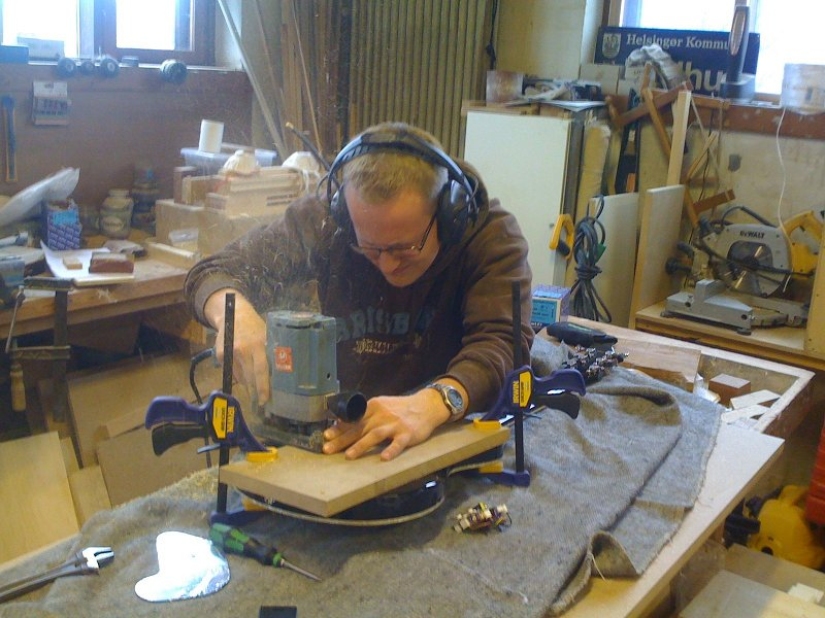 At first glance, Bjørn thought the body was made of some kind of plywood, but after having worked on it for a few seconds it was clear that it was made of solid basswood. After a few minutes the head of the workshop entered the room and said 'It smells like you're working with basswood'. I was quite impressed by that. 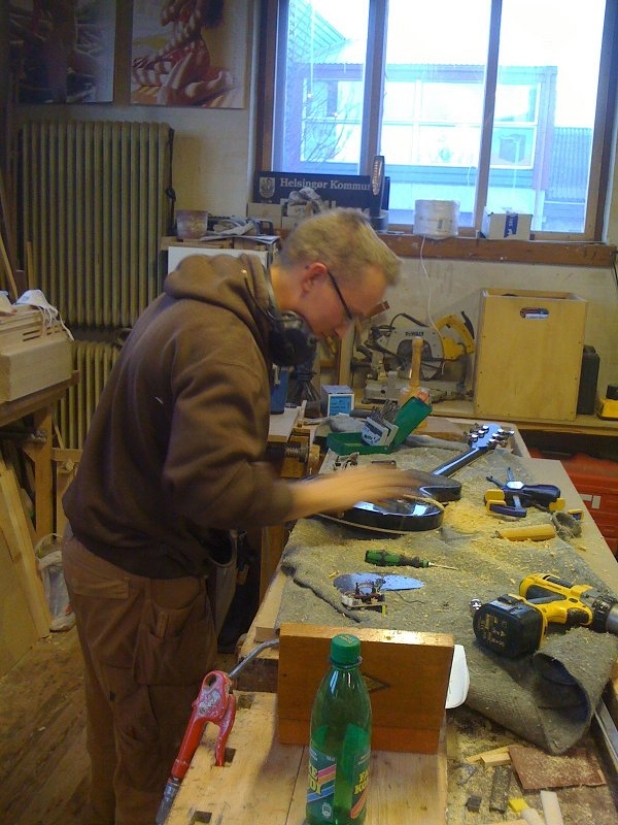 I did the wireing and soldering myself, which was no big deal after I figured out how to read the scematics. Figuring that out, was a big deal. All I need to do now is to put new strings on and plug it in... 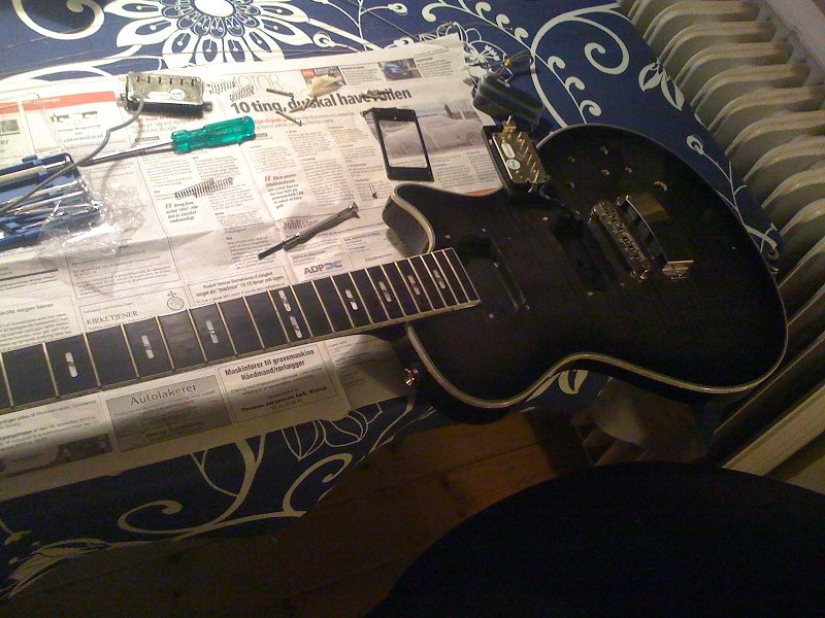 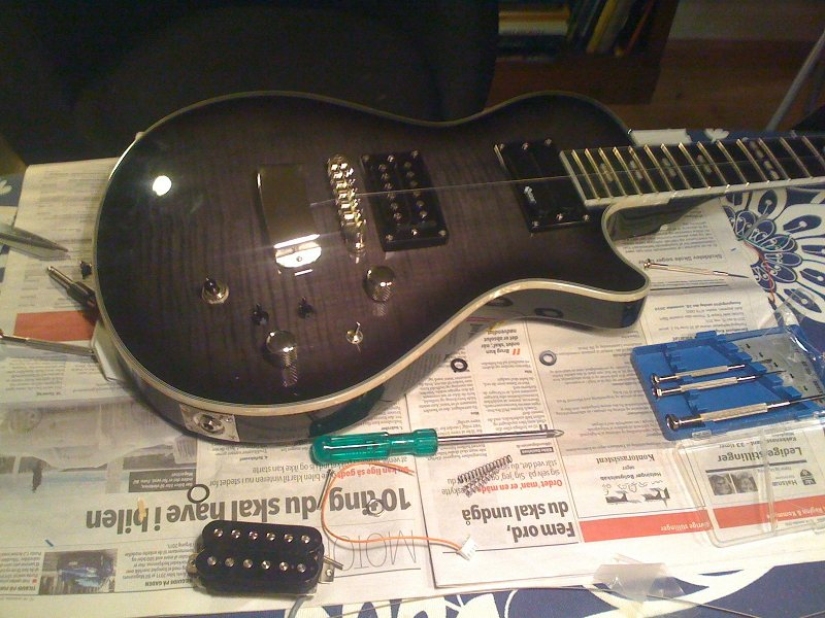 It has only been a few weeks since the release of the 'Cloudberries', and now I can present 'The Trench' - The fourth and final video from the 'Anyway' album.
The song 'The Trench' is about explorers Don Walsh and Jacques Piccard who as the only two persons ever reached the bottom of the Challenger Deep, the deepest spot in the oceans.
The video on the other hand features Jesper H. Petersen as a businessman delivering some really bad news to a board played by Camilla Haastrup, Tonny Jørgensen, Thomas Hansen and Rasmus Jørgensen.
The idea for this video came after having seen pictures of fighting in the Korean parliament.

Finally I am able to present 'Cloudberries'. The third and possibly penultimate video to emerge from the 'Anyway' album.
It features filmmaker / singer Edith Tvede as the Lady of the Woods, Huldra from the nordic mythology. We filmed it from february to october 2010 in various locations:

To shoot this video we had a lot of help, and I would like to thank Signe, BjÃ¸rn, Karen, Louise, Jesper and Mette for their enthusiasm and support

Oct 18 2010 4:41 PM
It&#039;s a wrap!
A project that Edith and I started filming in february, is now a wrap. From here there's a few weeks of editing and then we should be able to premier the music video for the track 'Cloudberries' off the 'Anyway' album.
Originally it was thought to be the concluding video, but now it's more likely to be the third out of four from that album. 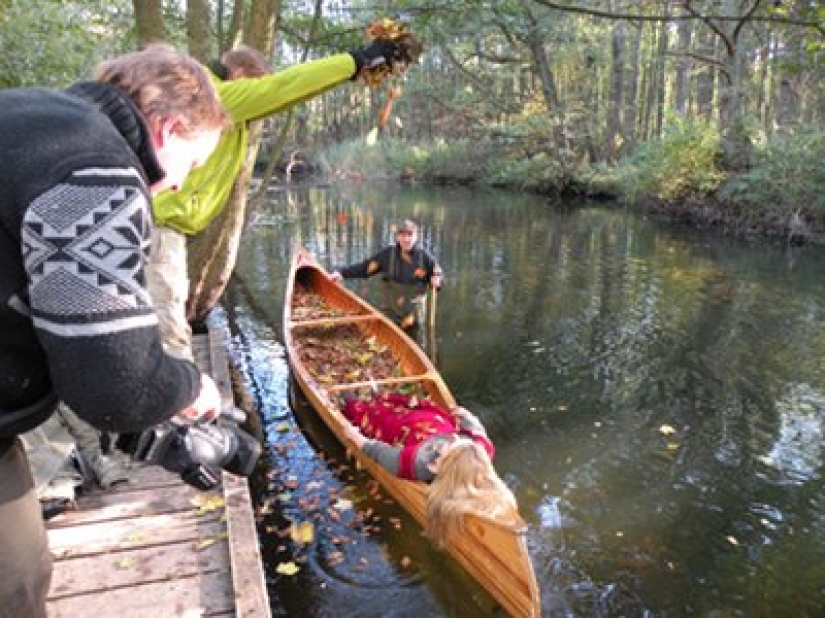 If that isn't exciting enough, my friend and mentor Klaus SchÃ¸nning visited us today. He brought with him his old pump organ. It's currently standing in the middle of my studio, and I have to figure out a good place to put it. 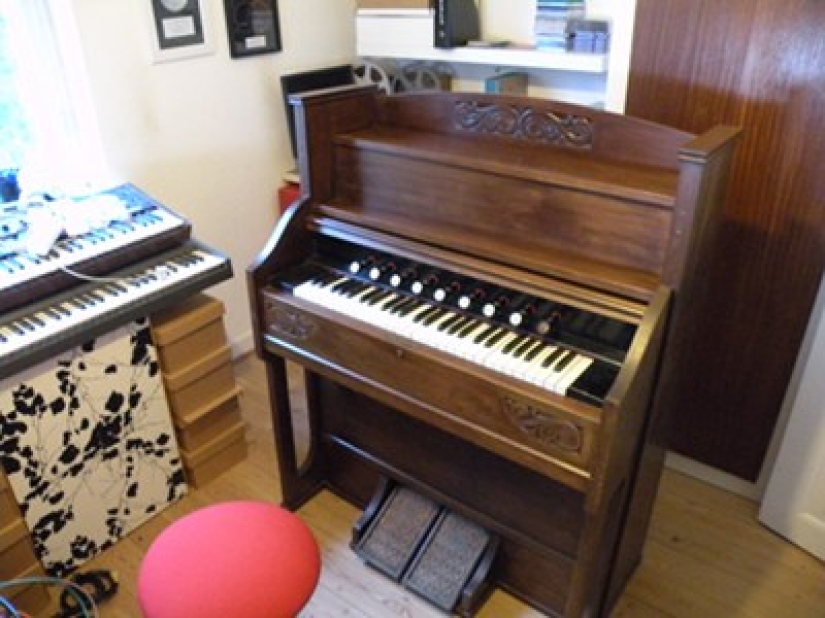 Sep 26 2010 3:16 PM
Strange places
I've been out hunting locations for the fifth and final shoot of the Cloudberries music video.
I didn't find what I was looking for, but I did find this apocalyptic place.... 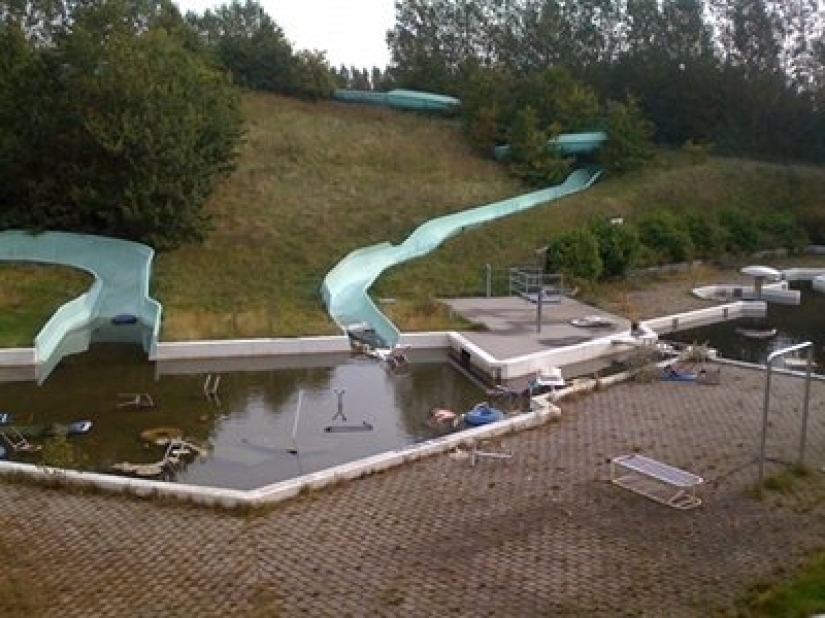 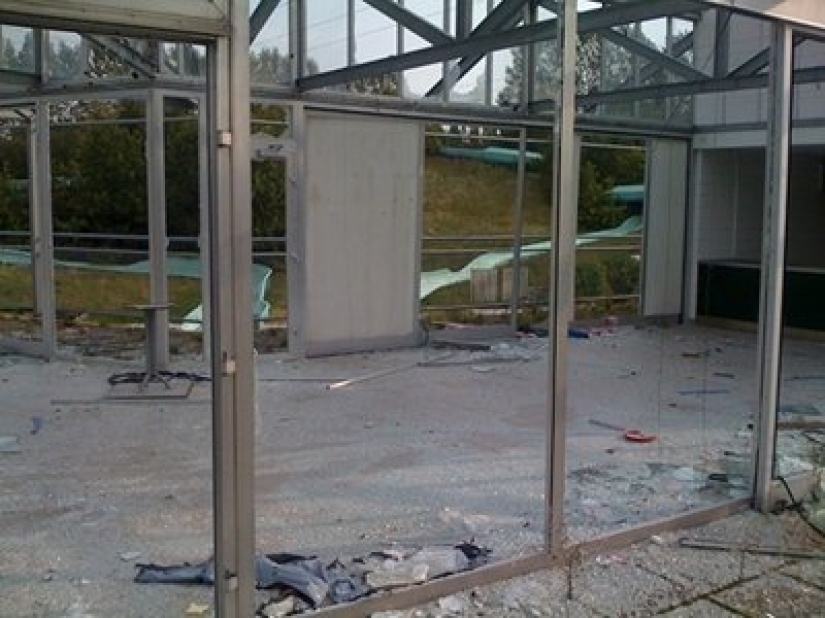 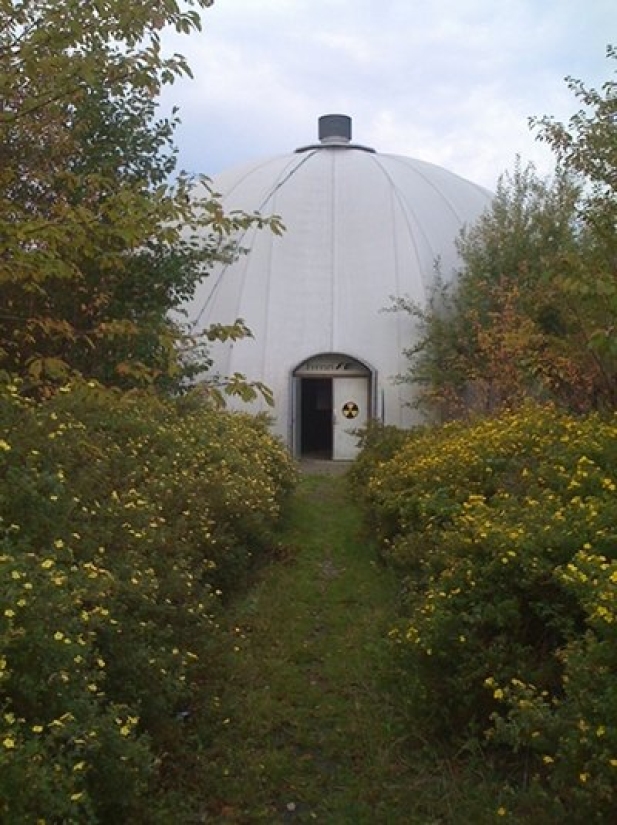 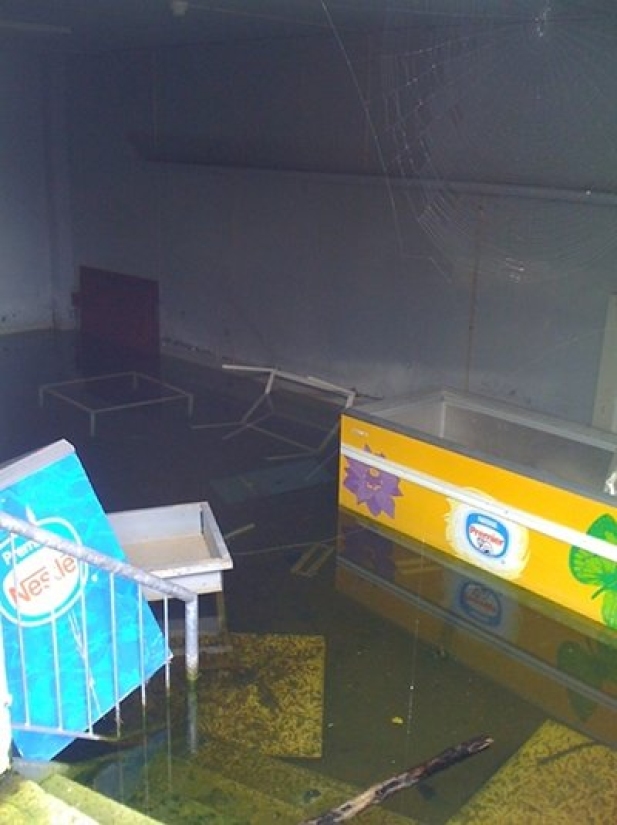 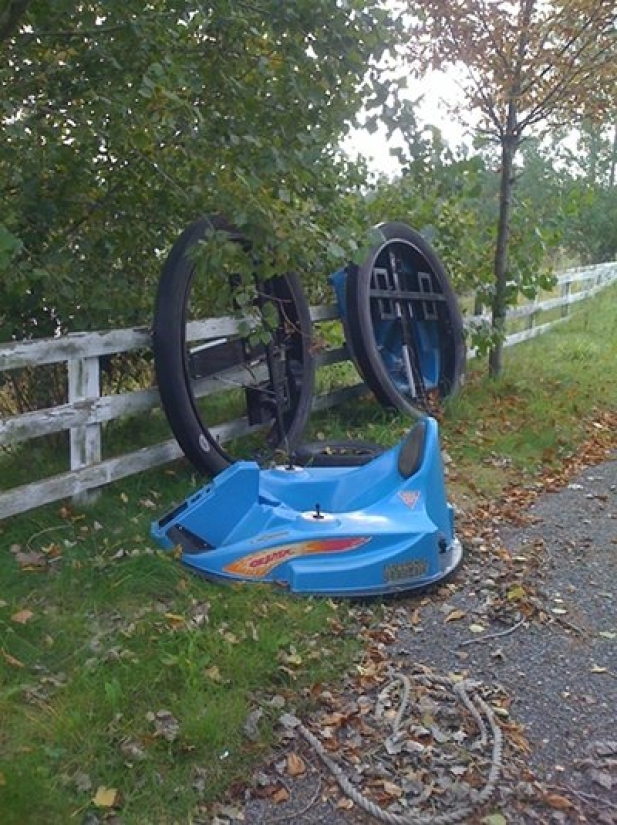 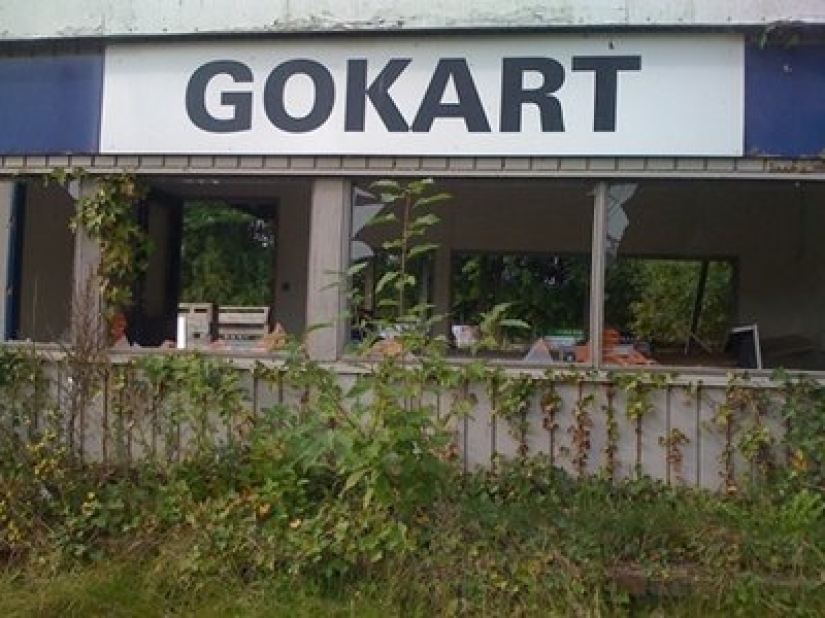 My blog entry of may 30th 2008 showed a picture of Jesper and me, during a very bloddy video shoot. Little did we know it would take more than two years before we could finally show you what we were doing.
Last night Trey Gunn (ex-King Crimson) published the video on his website: http://www.treygunn.com/blog/2010/8/15/the-fifth-spin-of-the-sun.html. The video is one of two I contributed to Gunn's 'Music for Pictures' project. It was filmed in the basement under a danish grammar school, because it had the right type of concrete walls. Only meters away behind a closed door were a lot of children, who had absolutely no idea that we were tossing theater blood around....

Aug 01 2010 5:27 AM
Website overhaul
It may not look like it at all, but the website here has had quite an overhaul!
There are still a few things that need some tweaks, but generally the site works better now.
Some of the features added are present here on the blog. Now you can browse the blog using the menu on the left and, if you like, it is now possible to add comments. Please feel free to do so.

The Trench
Last week I found myself cruising the Copenhagen Metro line with Jesper H. Petersen dressed like a businessman. As this is something Jesper would normally not do by any chance, it took a camera to persuade him.
The footage we filmed is going to be used for the music video for 'The Trench', the third track off 'Anyway' to have a video.
The video will consist of two parts, and we're currently organizing the second shoot. 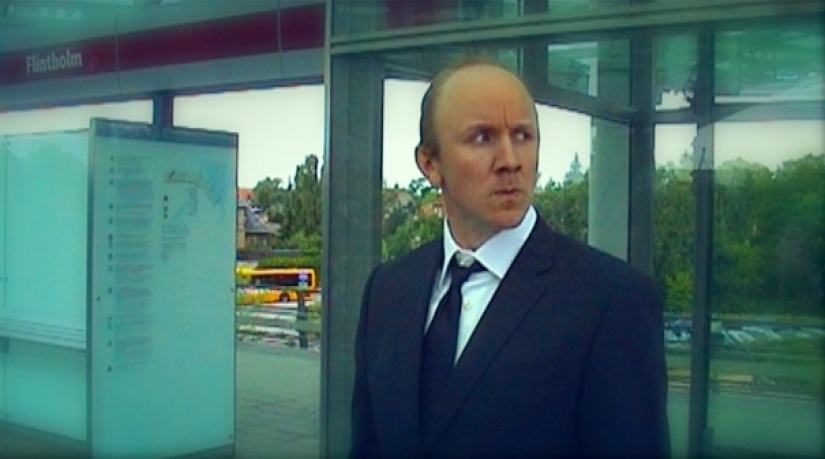 Jul 19 2010 4:09 PM
A week of creativity
Lately I've had my hands full with a lot of different stuff.
First of all I've send Jesper a 51 minutes long audio file of what we've got so far of our collaborative album 'Second Dream : Two Suns'. It isn't finished yet, but now it actually resembles an album.

Then I've been to the Forsakar waterfall in southern Sweden with Edith Tvede, to film the third part of the music video for 'Cloudberries'. The video features Edith as the mythological lady of the woods Huldra from the scandinavian folklore. The video is divided into four parts showing the changing of seasons, and will not be finished until october. We started filming in february when the land was covered in snow, and the last part will be filmed when the forest is saturated with autumn colors. So it is quite time consuming.

Edith as Huldra at Forsakar

Last but not least we've had the mansion filled for the weekend with a lot of creative people, talented within a lot of different fields. It has certainly been a weekend to remember, and I am very grateful that the arrangement was a success. The weather was good too!
It is my belief, at the artists involved left the experiment with a lot of ideas for future works. I did.

Breakfast at day two of the Creative Weekend

After being unavailable and forgotten for just about seven years, my debut album 'Odyssey' will now become available once again. This time through iTunes, cdon.com, skivbolaget.se and a few other online music stores.
As with the 2008 rerelease of 'Tabula Rasa', 'Odyssey' has had a slight makeover. This time the changes are fewer and more subtle than the 'Tabula Rasa' revamp. But I couldn't resist making changes. Like for instance removing my own voice from the transition sections and replacing it with a synthetic one. Also new guitars have been added along with delay effects and a new mastering.
I have had a lot of second thoughts about this rerelease, and for a long time I didn't think it would be a good idea. Being the first album I recorded and produced, for a long time 'Odyssey' sounded very immature to me. It still does. However it may serve very well as a document of where I was at the time. Both sonically and technically.
'Odyssey' was created through a series of improvisations I did in year 2000. I used to work on it late at night, and for most part I switched all my synths on, hit some keys and let myself go with whatever came out.
Originally 'Odyssey' was released in january 2001.
The revamp can be purchased 'here'. 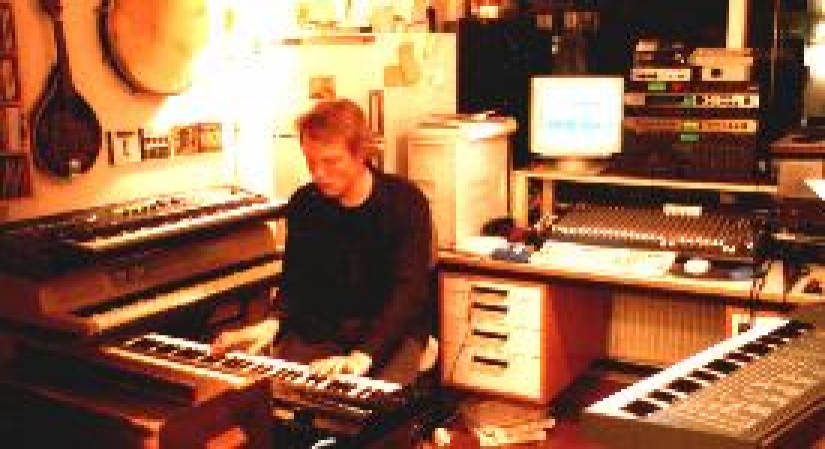 Me in my studio recording 'Odyssey'. Probably october or november 2000