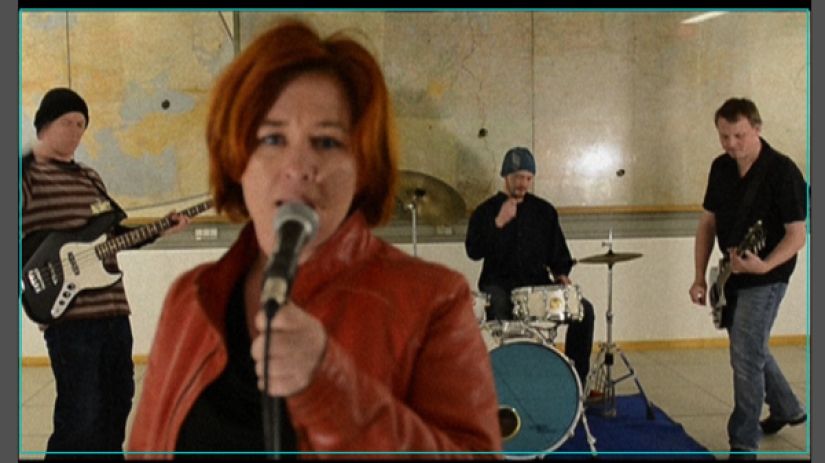 A day spend editing that will be followed by another day of editing.
Things are getting a bit intense, and we're running short of time.
Preparations for the january 19th concert is in full swing. Still a lot of things to be sorted, though.
A few days ago we spend a few hours shooting videos for two of the albums tracks. The location was an abandoned military bunker from the cold war era. A small version of the band consisting of David, Tanja, Jesper and myself did a performance shoot in a room where huge maps of the eastern block posed prominently on the wall.
Elsewhere in the bunker the artist duo Camilla and Signe shot footage that could become a music video, or a concert projection, or something else.
I havent seen their work yet, and I have no idea what to expect.
Exciting!

Harvest will be performed live in concert early next year.
Ticket pricings are still to be finalized.

Harvest will be performed at 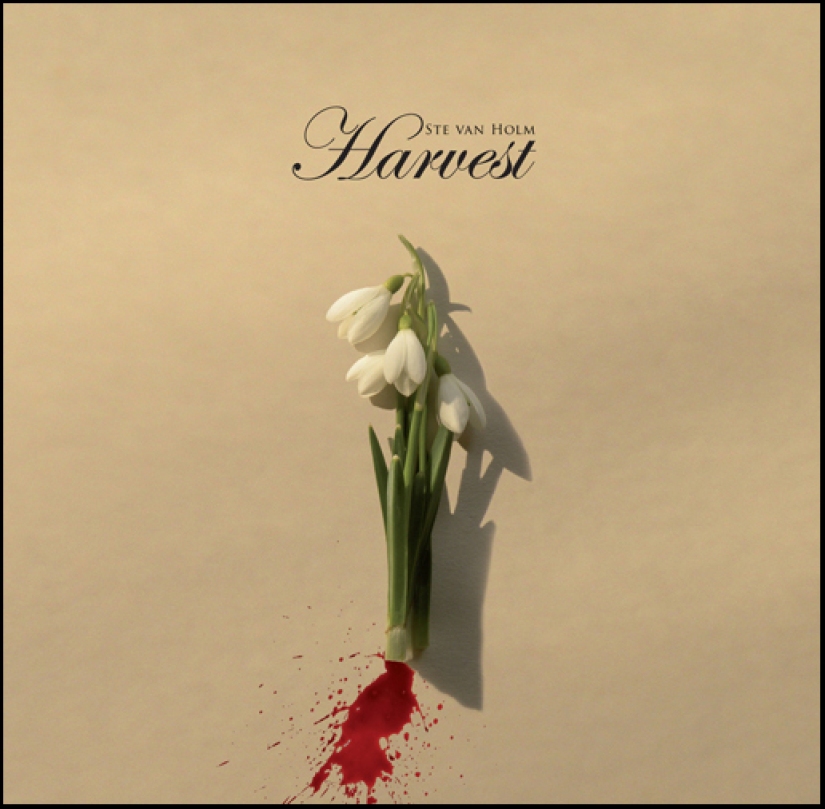 The opening track from the new album:

There's no more recording to be done now that Jesper H. Petersen has laid down his grooves on the tape.
Now there's only post production...

The new album will be here soon! 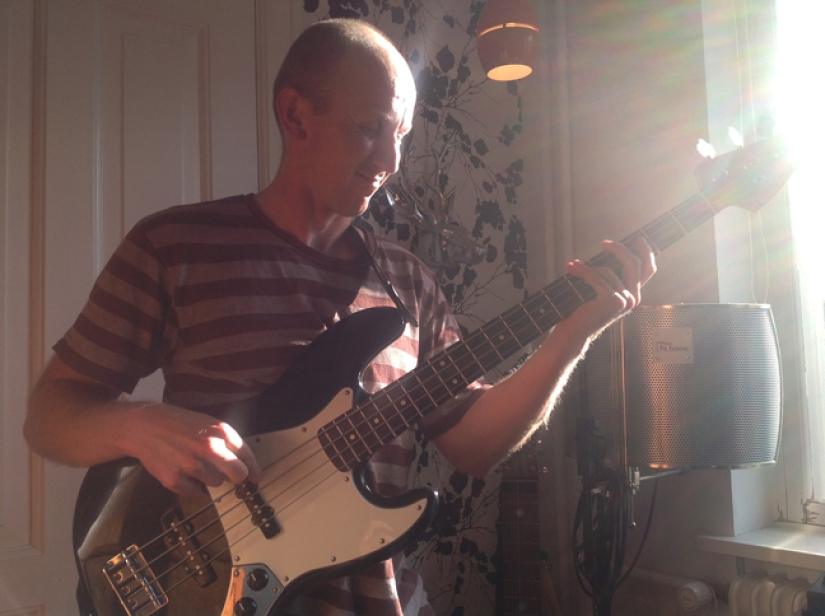 Jesper and his JazzBass

Aug 08 2012 10:16 PM
Last weekend...
Last weekend I drove to the outskirts of Copenhagen to a rendezvous with David and his drum set. David is currently test-driving a Citroen electric car, and this day he wanted to see if there were space enough in it for an entire drum kit. 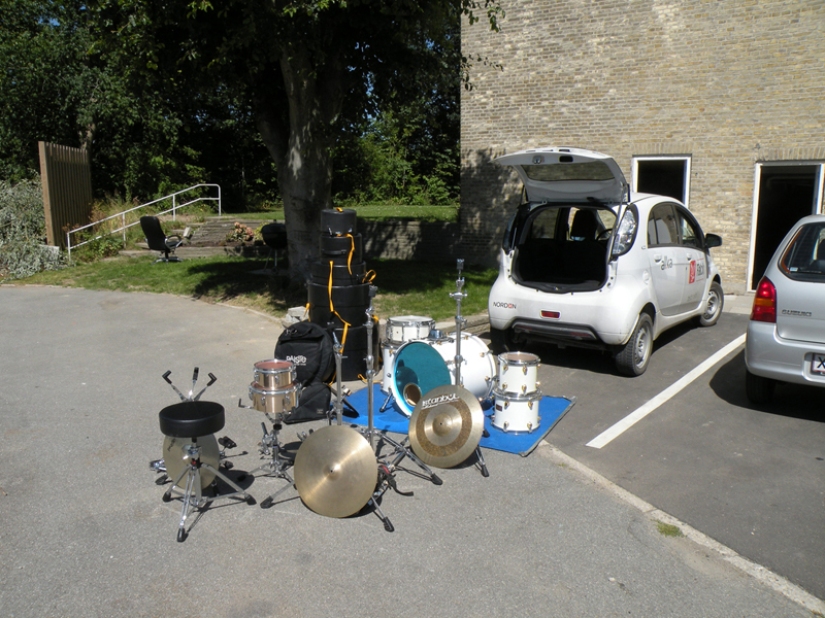 The car and the kit 1 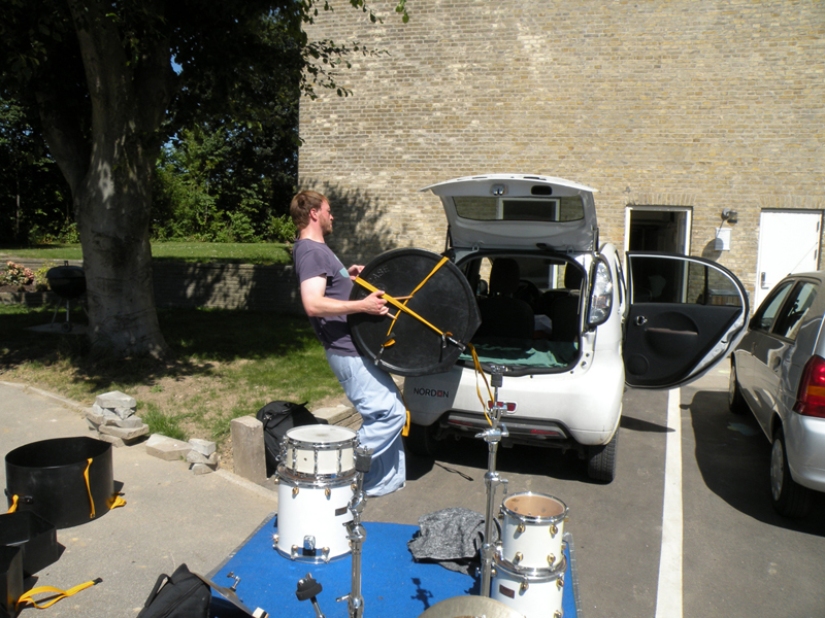 The car and the kit 2 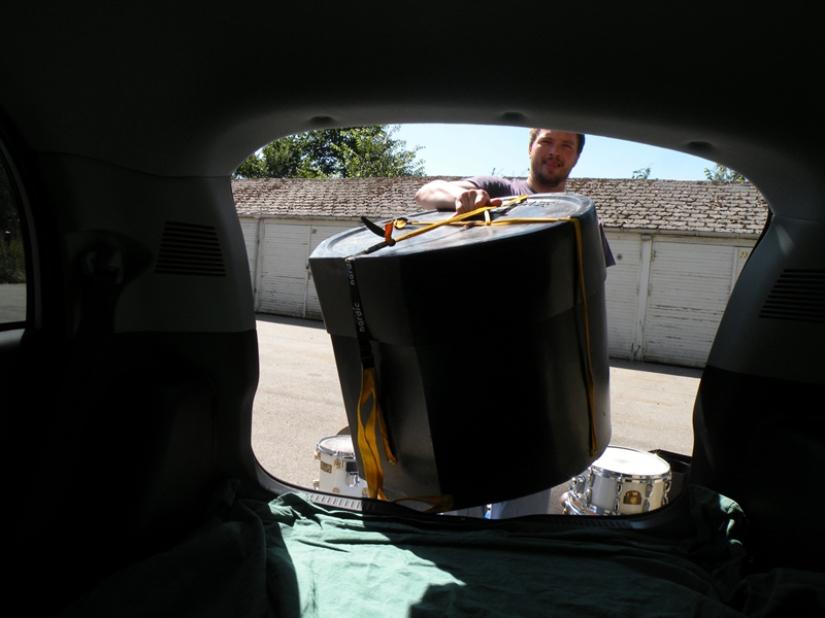 The car and the kit 3 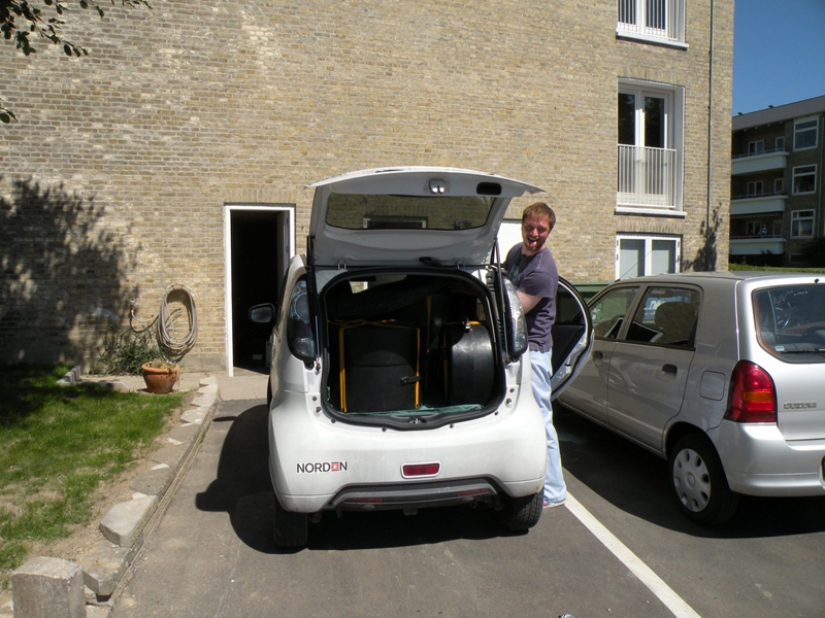 The car and the kit 4 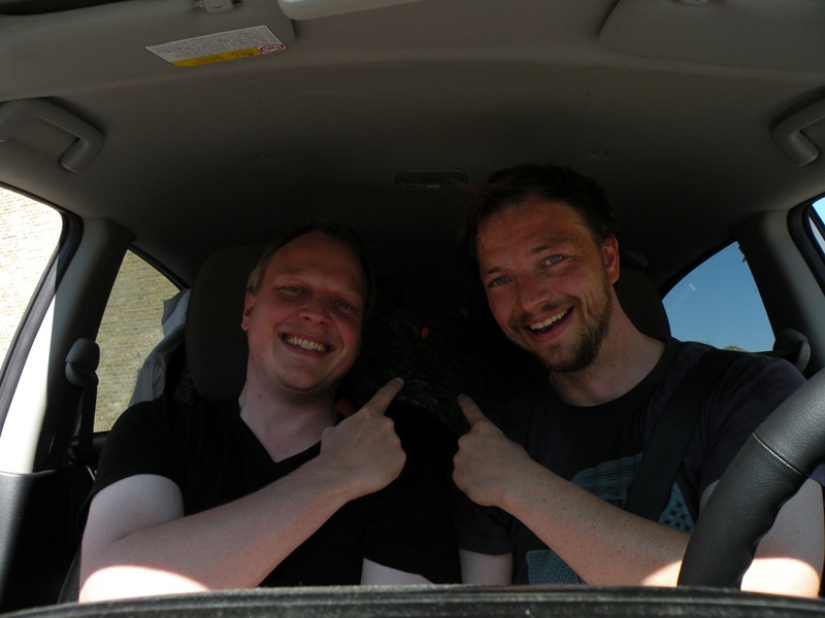 David and yours truly in a now drum kitted car

One of the cool things about electric cars, except for being more environment friendly than it's fossil fueled cousins is, that there's free parking in the city centre. Hence we used Davids now well packed car to the Scandic Copenhagen congress hall where he was going to play a gig later that day. Two days earlier I had received an sms from David where he urged me to be his guy behind the mixing desk. 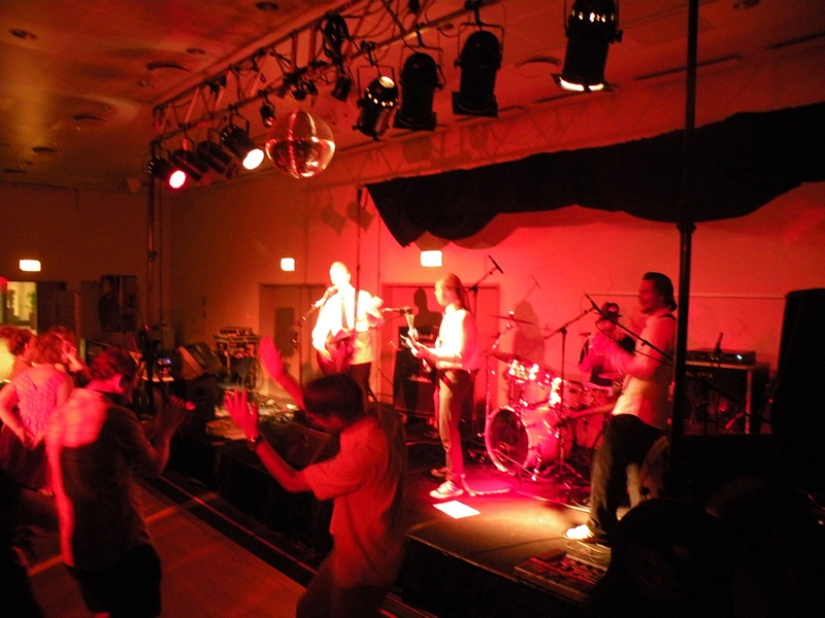 I thought I was only going to do David's gig, but I ended up spending the whole weekend at the mixer. And I enjoyed it a lot. 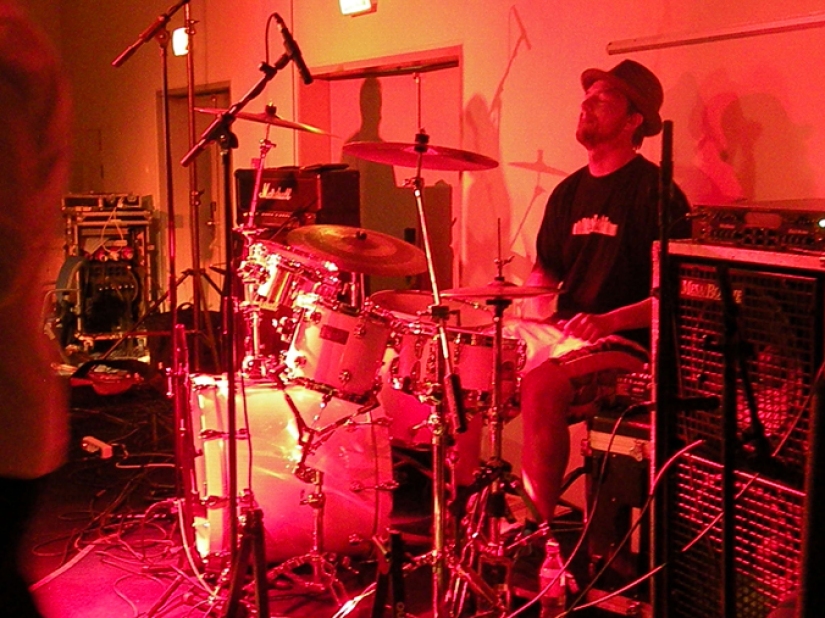 David and his setup

One of the interesting acts was Temper-Mental MissElayneous, a girl from Dublin doing hiphop with a bodhran before doing a more traditional set. I have always loved the bodhran, and it was very refreshing hearing it in hiphop. 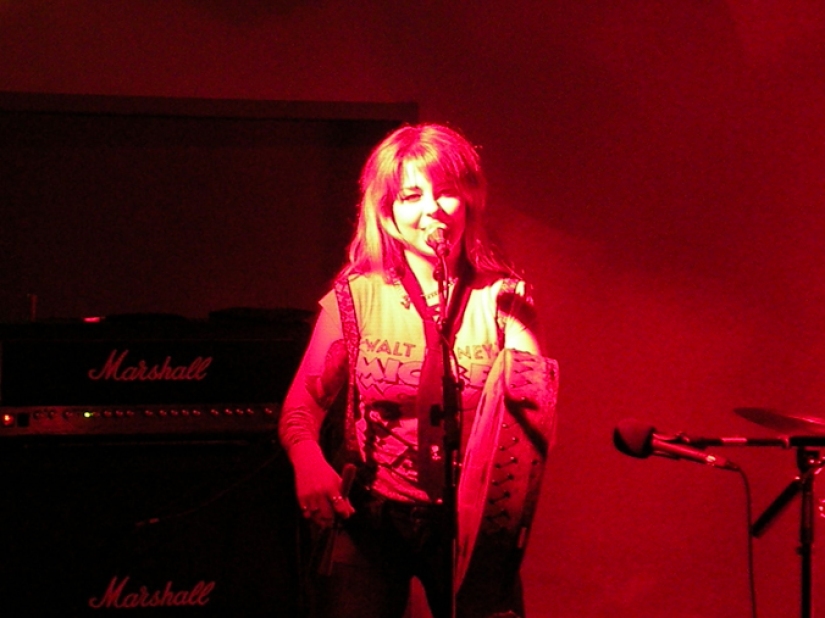 Another interesting act was the Norwegian / Danish band 'Megafon' who played a very strange blend of gypsy/punk/electronica. Their lyrics were sung in danish, norwegian, english and bulgarian, and they used processed saxophones instead of guitars.

I've spend a whole week absorbing all the inputs I got. 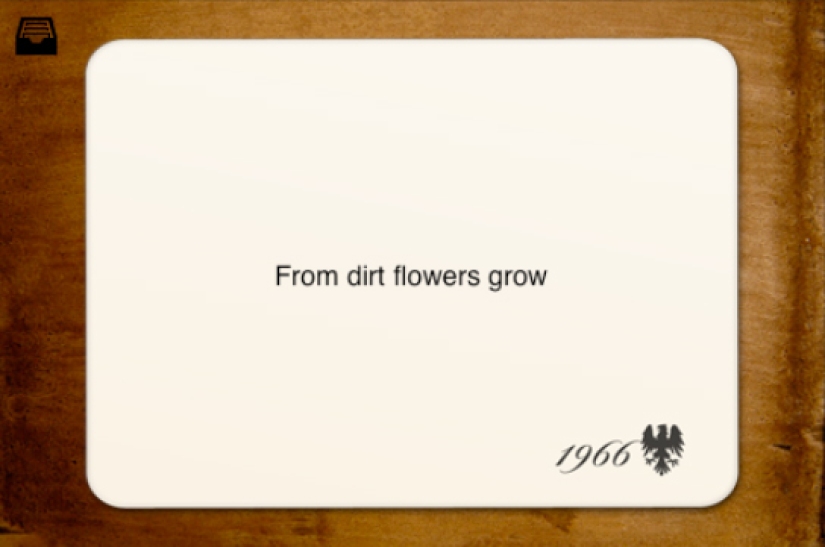 On another note I have been doing dubs with both Tanja and Anders, and apart from a bit of hammond organ, only the bass is still missing before I can declare the new album a wrap.
The title for the album is 'From Dirt Flowers Grow', a statement I got from the electronic version of Brian Eno's Oblique Strategies I always carry around on my iPhone. 'From Dirt Flowers Grow' was the card I drew the morning after performing a terrible gig and was considering not doing any more music at all. My answer will be released later this year.

All drumloops and mididrums were replaced by live drumming by none other than David Jeppesen.
David is the kind of drummer I like. Partly because I like him a lot on the personal level, but also because he hit those drums very hard and very precisely.
I am currently unable to record drums in my own studio, as I do not have enough microphones - or enough space. So we went to the Mir Sound Studio in Copenhagen, which is owned by Troels Bech.
I have worked with Troels on quite a few occations now, and there was no question in my mind, that he was the one for the job. 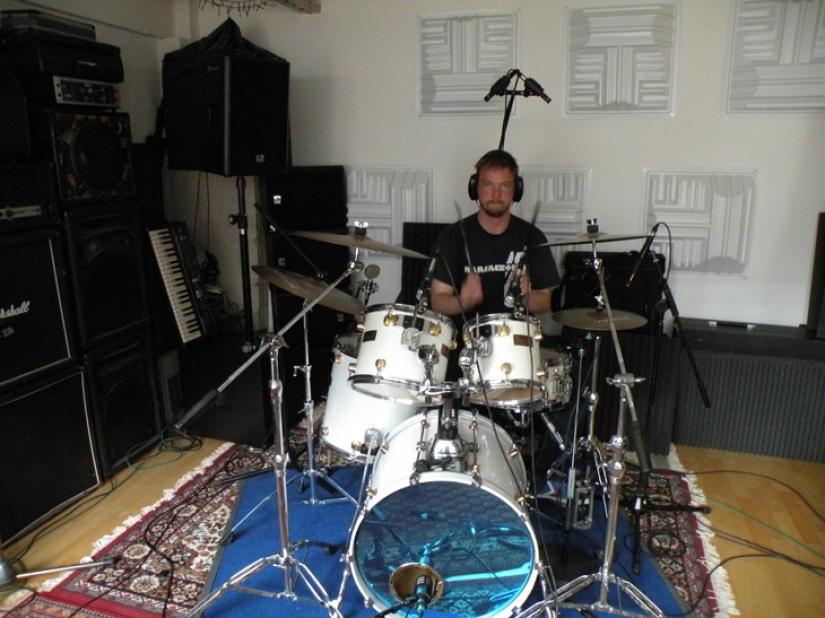 David at the MIR sound studio 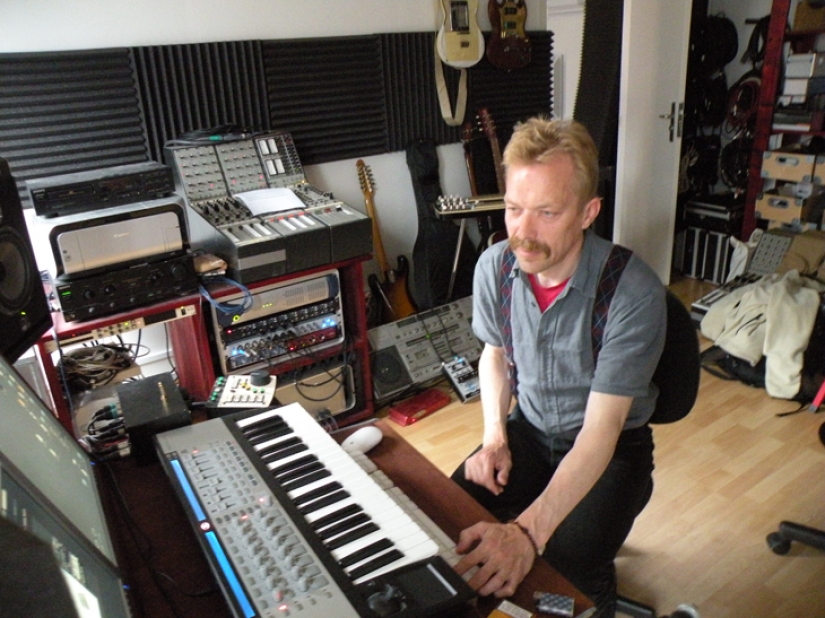 Troels at the MIR sound studio 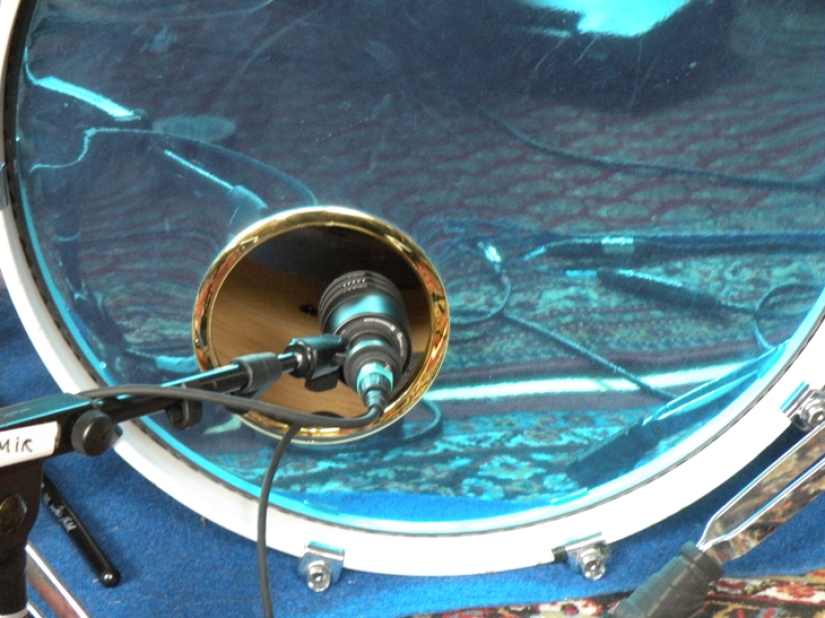 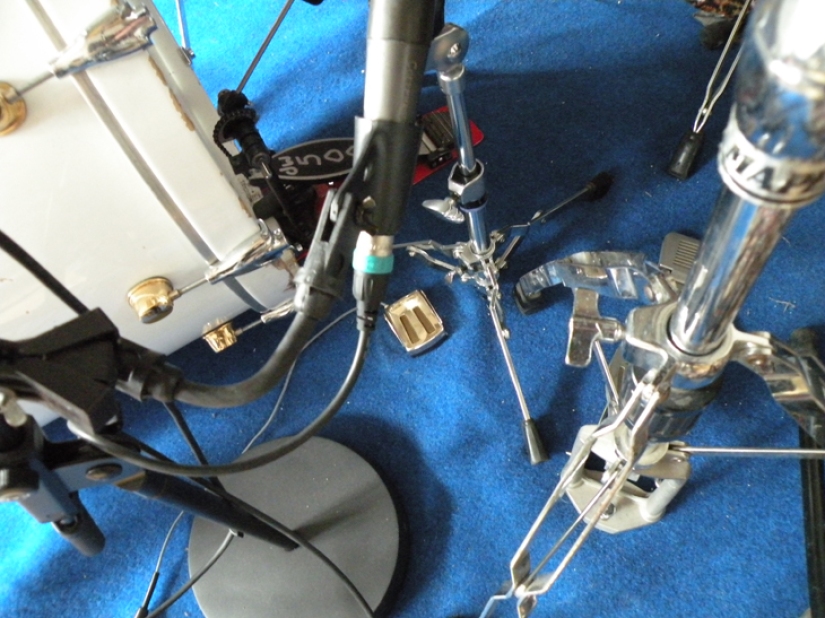 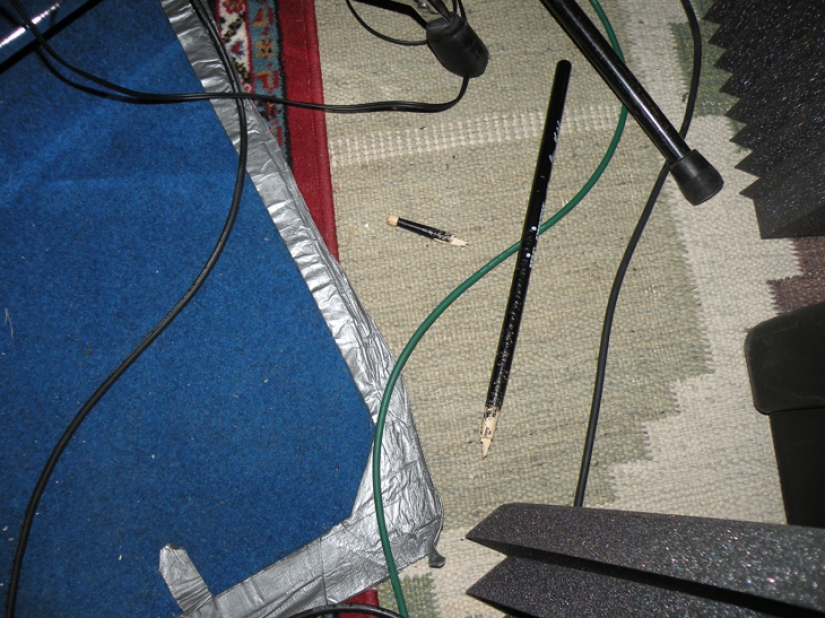 The session lasted eight hours on the minute, and we recorded drums for nine tracks. Some were easier than others.
Now there's some editing to do...

Jun 02 2012 10:04 AM
Coffee with Martin
Summer's here officially! Hooray!
Although I must admit that it is a very greyish and windy start of the summer.
Grey with quite a few raindrops as well.

Today I had coffee with my pal Martin Jørgensen who is the most able percussionist I have ever met. We had a nice chat about the times we were on tour together, and discussed possible futures.
Martin provided his skills on the Constructions album that came out in 2007, where he played on industrial rubbish and allsorts. This can be seen on the DVD that came with the CD release. 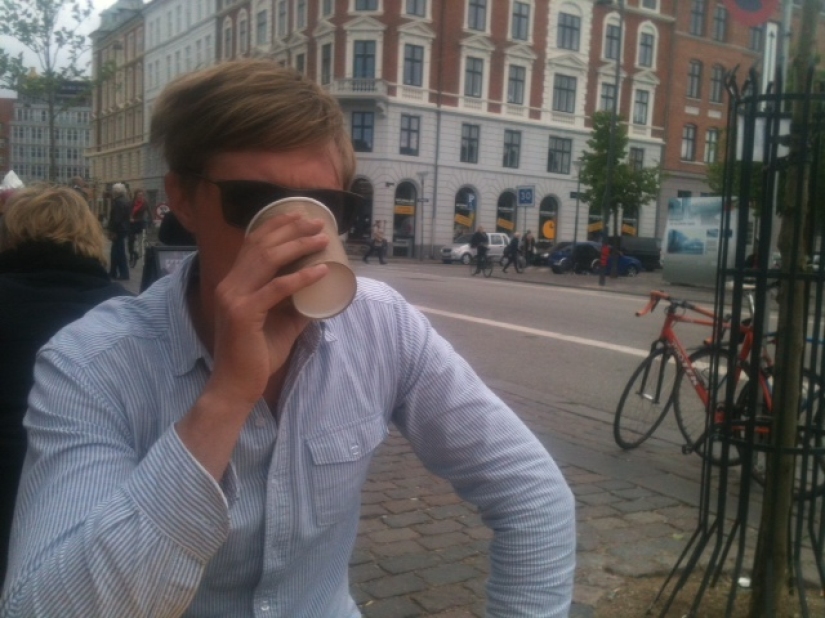 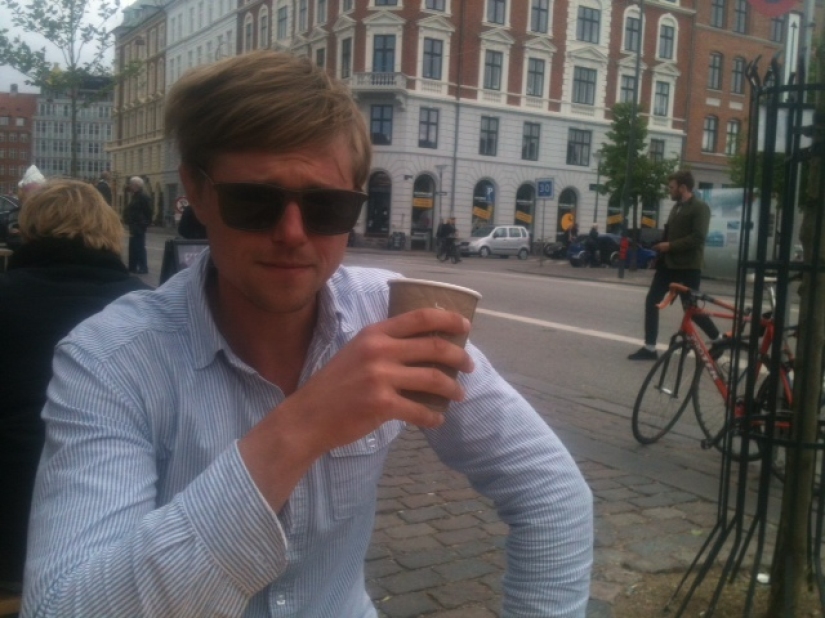 Martin now spends most of his time in Brooklyn, New York and hence we discussed how to collaborate via the internet. This took us to the nearest musical instruments shop to check out the latest incarnation of Propellerheads' Reason software. A software I now use for almost all music production I do. 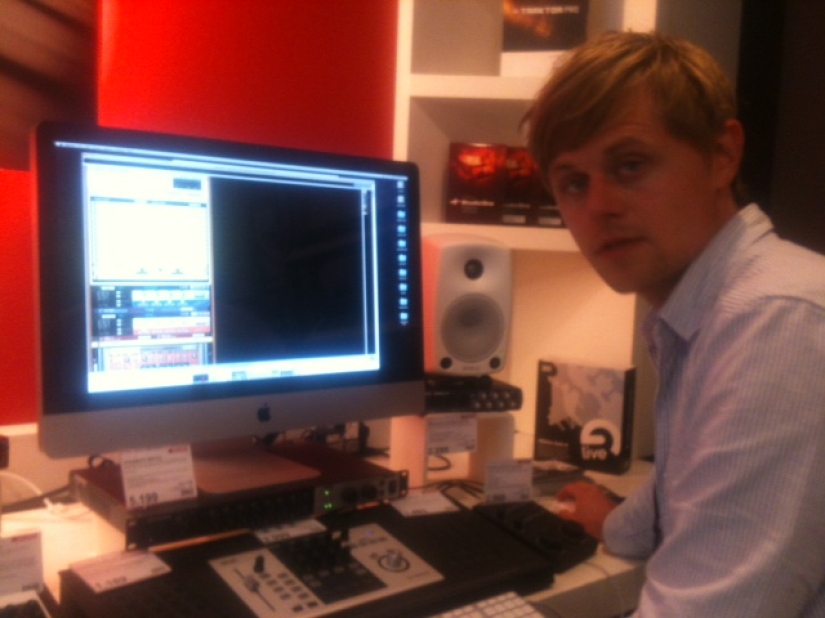 Martin with Reason 6 on Mac

Apr 26 2012 12:57 PM
End of april
I've taken some time off from the recording process, to work with my friend Edith Fabritius Tvede who provoded vocals on both 'Anyway' and 'The Dual Resonance Model'.
Edith is not really a musician, but a talented filmmaker, and this weekend I served as runner as she shot the final scenes for her forthcoming film 'Out of Season'. 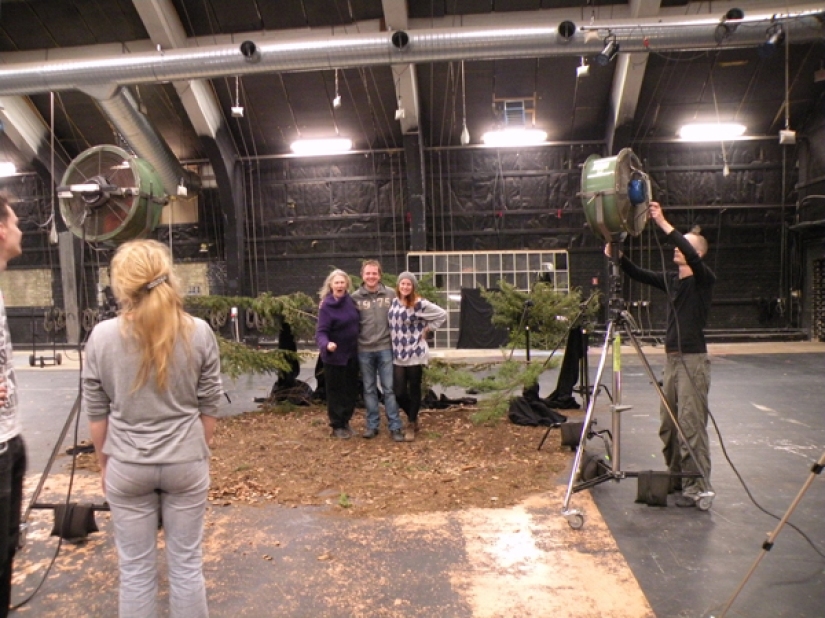 The filming was done in a large studio at Zentropa, the base of Lars von Trier, and featured a 6 by 6 metres green screen.
I can't reveal the plot, but it will premiere soon. 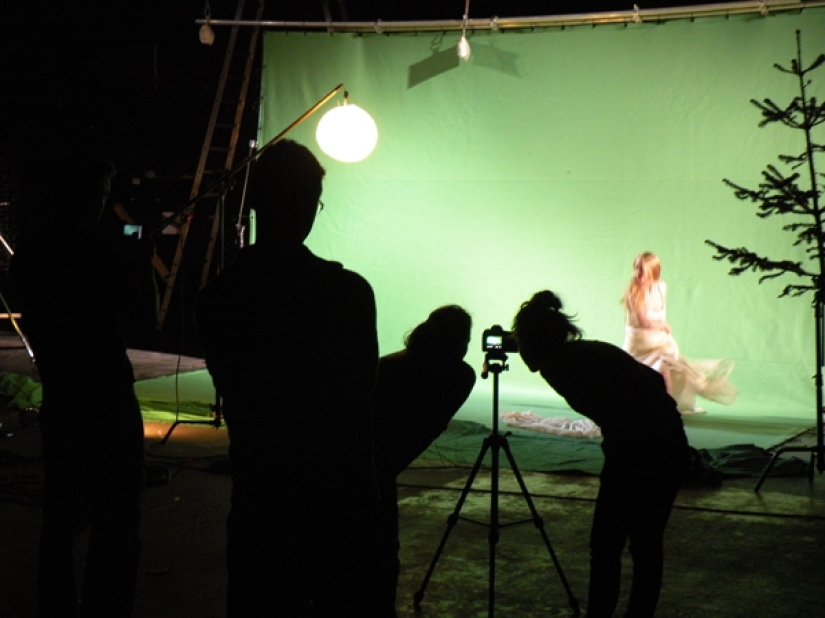 As the night fell the other evening, we had a very special guest. A stork decided that our rooftop was a cosy place... 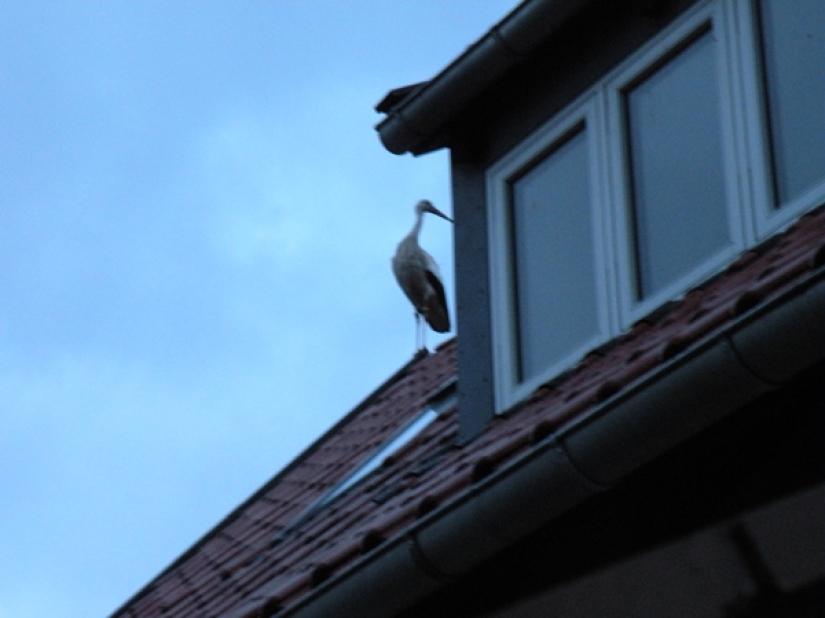 Apr 02 2012 5:33 AM
Anders
Work in progress... and it's progressing well. I've written all the lyrics for the album now, which is always the last thing I do.
I know a lot of musicians who thinks my way of working is odd. I guess they write the lyrics as they strum along at the very first stages of a song. That's not my way. I have tried it, but it has only worked for me on rare occations (The Noise from Constructions). My way is to do an entire instrumental production, and then move on to writing lyrics. It may be odd, but it works for me. And now that stage is done too.
I'm not through recording though... 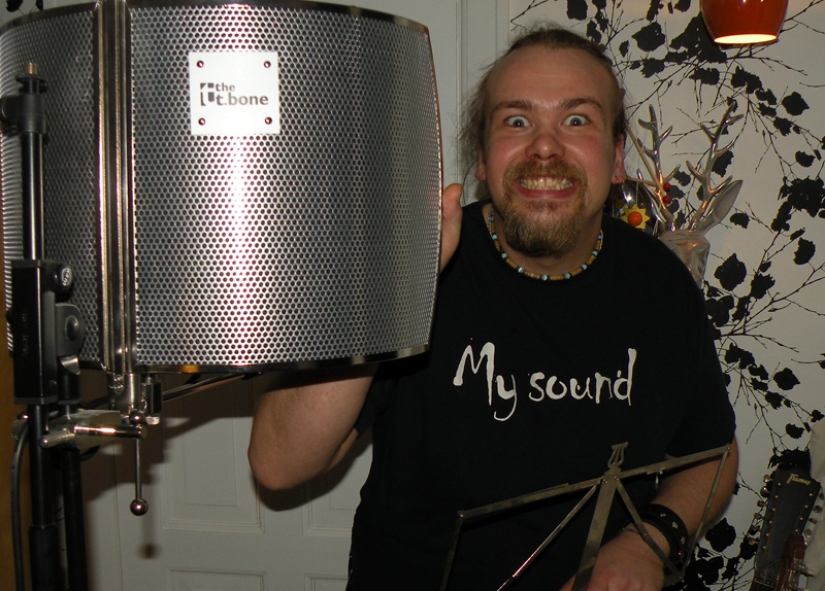 Anders by the mic screen

Long time collaborator Anders Brandt came by the provisional studio the other day to provide vocals for the album. He also brought his black Les Paul guitar and did a very beautiful solo for the closing track.

Mar 12 2012 10:04 AM
Stina
Stina Madelaire who provided vocals on much of 'Anyway' (the songs 'Garden of Exile', 'Euphoria', 'Blue Sky Cafe' and 'Where are you now?' to be precise), is almost ready with her debut album.
You can check it out over at her blog: Yogawise.dk
Mar 06 2012 5:07 PM
Minella
Quite a large portion of the life of the contemporary musician has nothing to do with music what so ever. It is plain office work as music has to be registered to various organizations before it can be played to anyone. I guess in the time of major record labels this was a way of protecting the working composers and their bodies of work. However, as the music business has changed and more and more artists - including yours truly - have decided to act as labels themselves, these organizations seems to work as obstructions for the ones they were meant to protect. Well, enough said about the absurdity of the music business, and on to some more desk work; sales statistics! All 2011 sales have now been accounted for. A few details:
- I sell more music in Germany than in Denmark.
- Cloudberries is my best selling track.
- The folks down under seems to have discovered my music. Thank you, Australian listeners. I salute you! 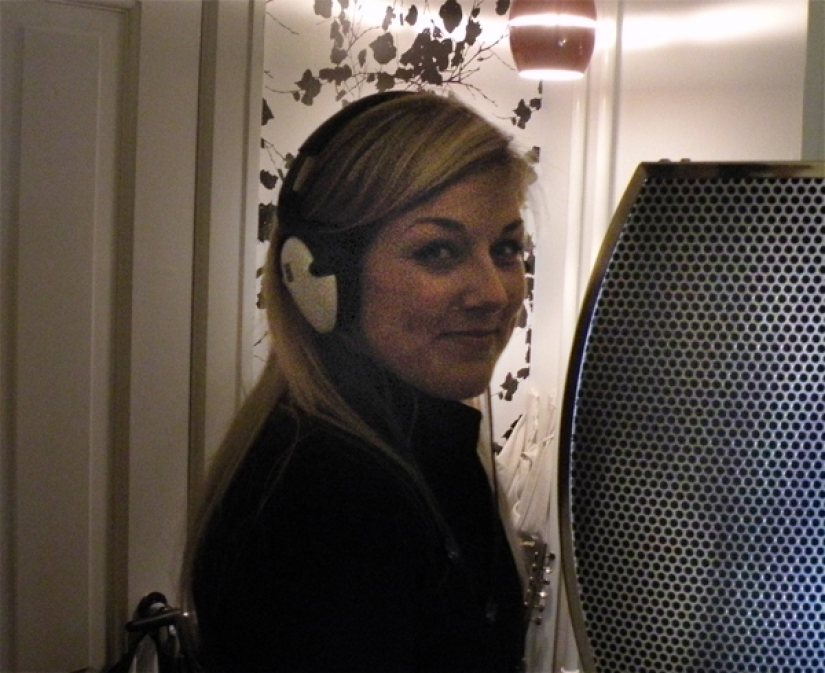 Minella in the studio

Apart from the strictly paper aspect of being a musician, I have been recording more vocals for the forthcoming album. This time the ever so beautiful Minella Ketscher was in front of the microphone. Minella has a singing style that instantly makes me think of singers from the sixties. A beautiful voice with a lot of expression. 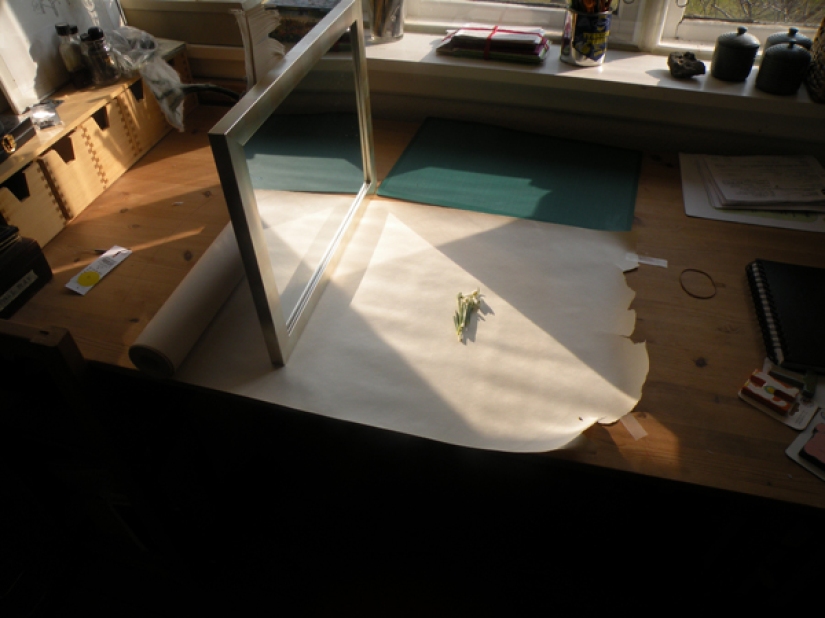 When I walk outside, I have discovered that a lot of snowdrops and eranthis have appeared. A beautiful and sure sign that spring will soon be here.
It also reminded me, that it is already a year since I shot the cover for the yet to come album, currently titled 'From Dirt Flowers Grow'. But both title and cover might change, as nothing is finalized yet...

Mar 02 2012 3:05 PM
Tanja
Lately I've been busy doing a lot of different things. Most of them having nothing to do with music. They had to be done never the less.
However, I have found time to do some work in the studio. Most recently the recording of two songs with Tanja Hollerup on vocals. 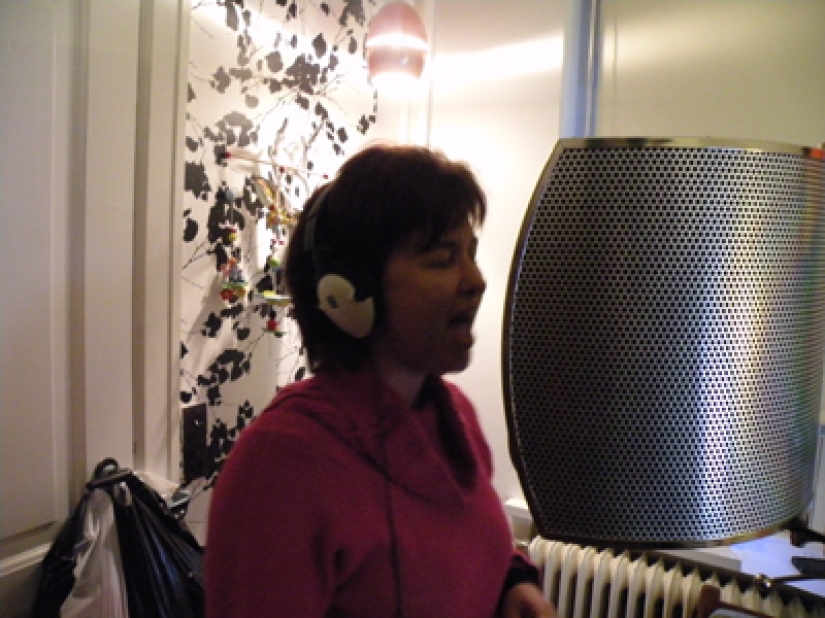 Tanja in the studio

Tanja first worked for me when I was doing a concert six months ago, and I had only little idea of how it would be to work with in the studio environment. Tanja, however, is a very able singer and we recorded everything using only a minimum amount of takes.
One of the songs we recorded is called Brocken Spectre, after an optical phenomena which in earlier days made people believe in witches.
I went to the Brocken mountain in october last year, but I didn't catch a glimpse of the spectre, as it was way too foggy... 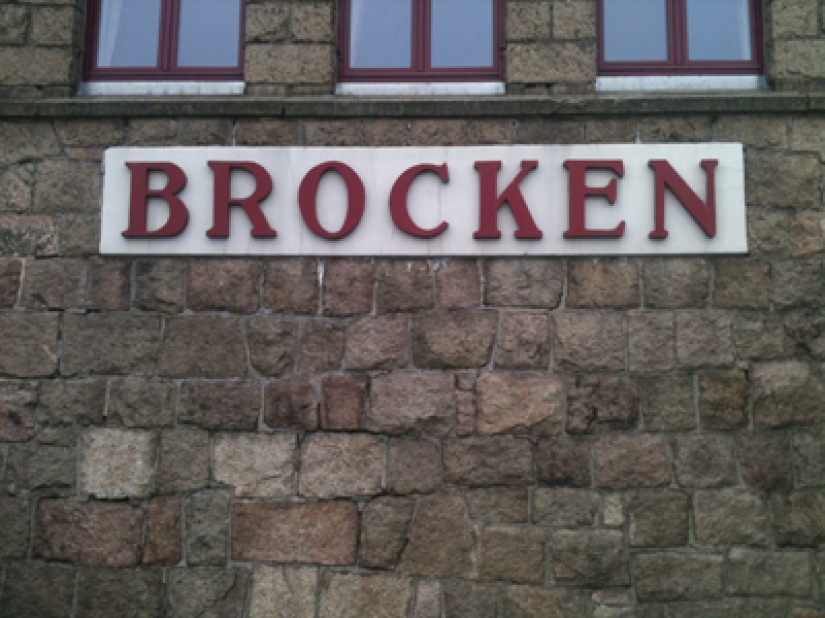 At the Brocken Bahnhof, Harz mountains

Jan 07 2012 7:16 PM
First week of the new year
2012 is barely a week old, and already a lot of noise has been recorded. This week has been about guitar solos. I have always been fond of guitar solos, but so far they haven't found way onto my albums. Until now that is.
David A. Jeppesen and Anders Brandt who both played in my live band back in august, has visited my studio and recorded solos to be featured on my forthcoming album currently titled 'From dirt flowers grow'. The solos are noisy and dirty. Just like I dig them... 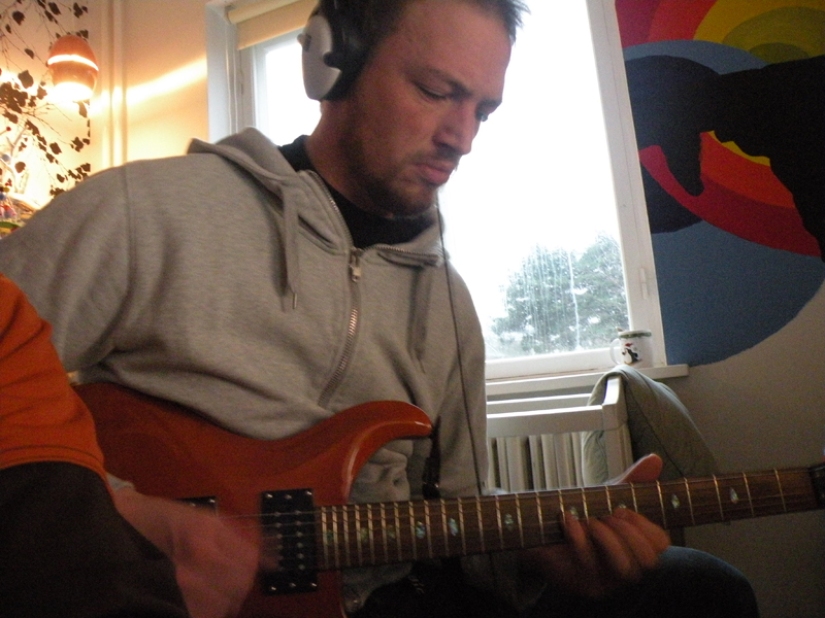 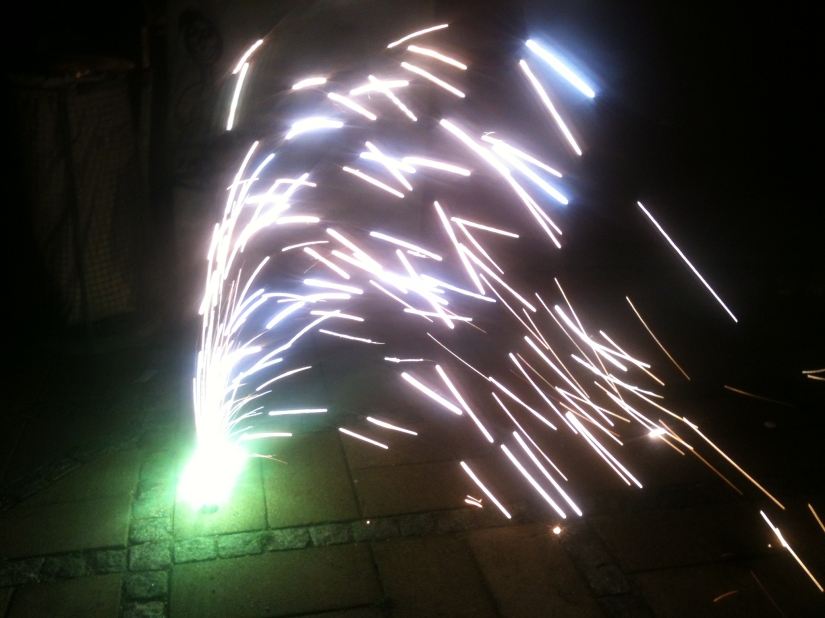 A little bit of flame and sparks

If everything goes as planned, I'll have a new album out in 2012.
And I'm selling my analogue equipment. Maybe I'll have a fully digital studio this year...