Because of the interest and success of the 'Traumfestival' screening, Yuffies (www.yuffies.com) has decided to screen my 30 minutes long film about Einstürzende Neubauten, which I did with Dihcar Bentaouzina in 2003/2004 once again.
This time the screening will happen wednesday november 30th 2005 at KulKafeen, Teglgårdstræde 5, Copenhagen.
The arrangement starts at 7pm.

Only two months after it was shown at Artliners (www.artlinersberlin.de) in Berlin, Yuffies (www.yuffies.com) will show my 30 minutes long film about Einstürzende Neubauten, which I did with Dihcar Bentaouzina in 2003/2004.
The showing will happen wednesday october 26th 2005 at the KulKafeen, Teglgårdstræde 5, Copenhagen.
The arrangement starts at 8pm. 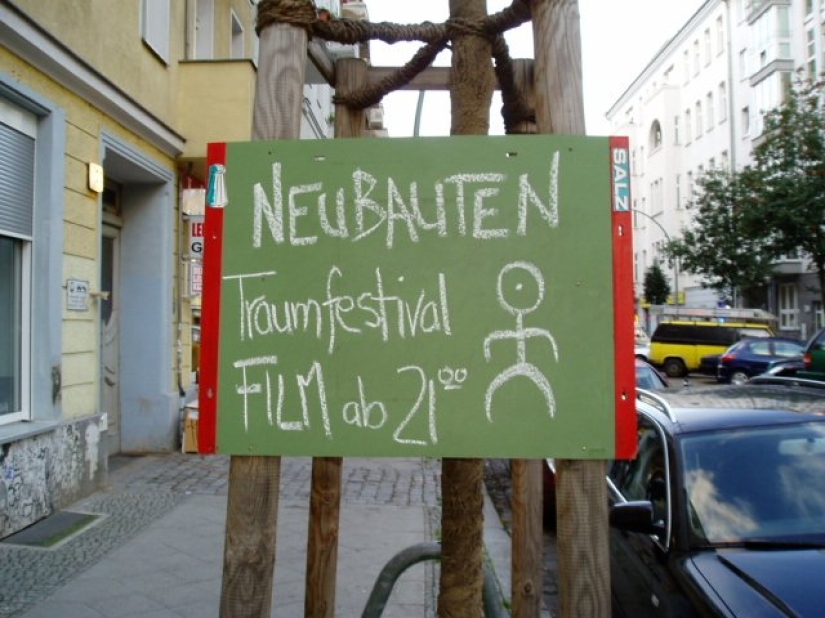 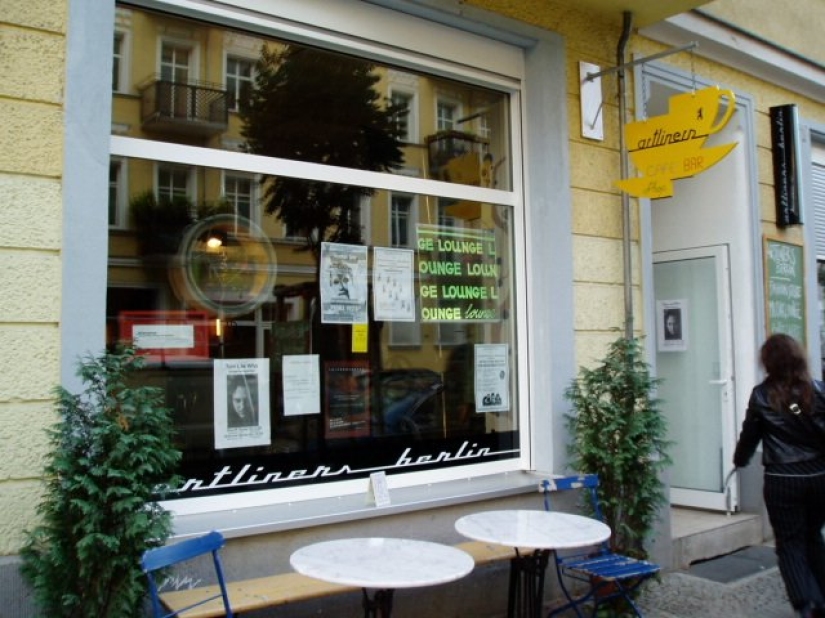 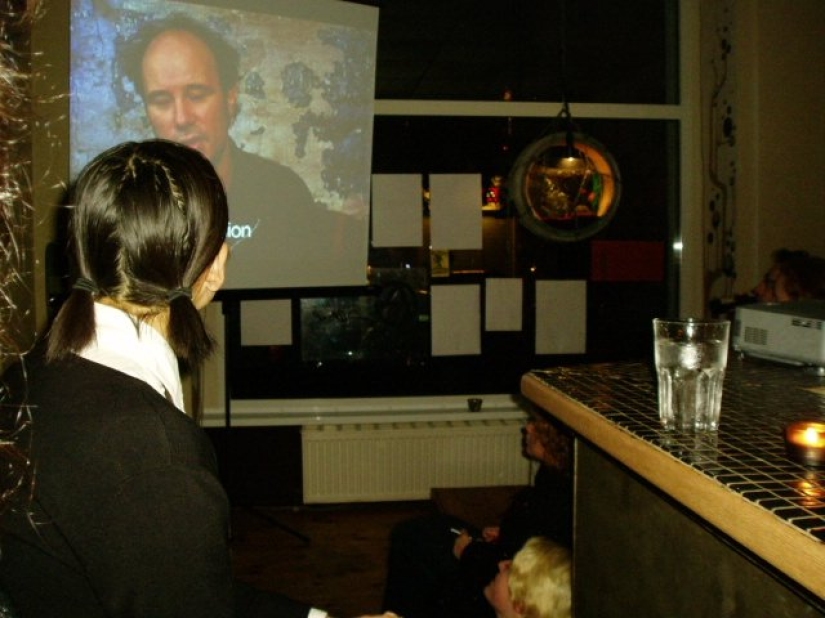 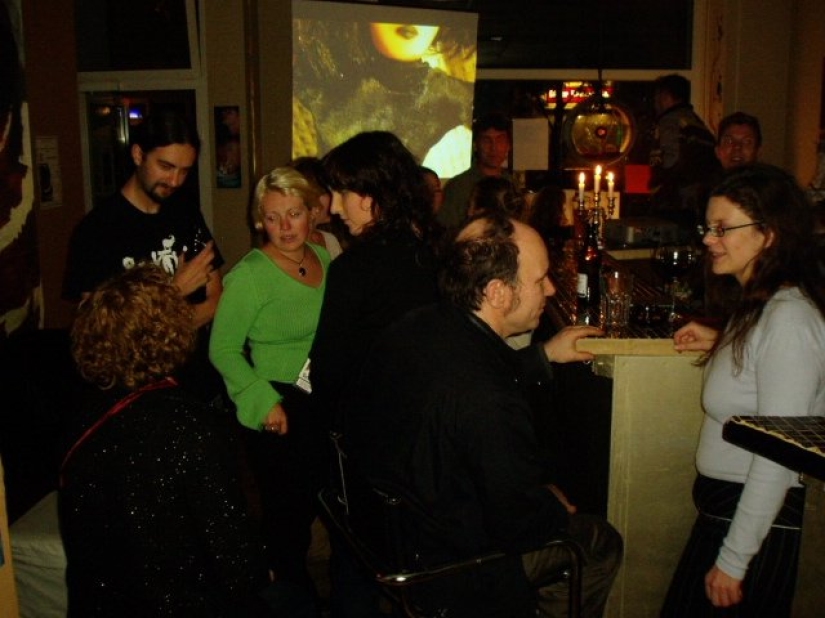 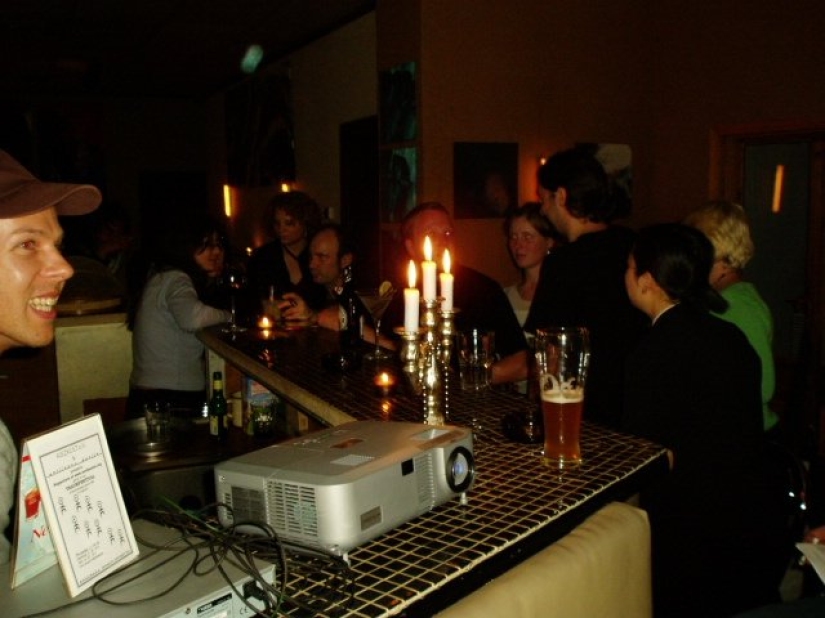 Artliners (www.artlinersberlin.de) in Berlin will show my 30 minutes long film about Einstürzende Neubauten, which I did with Dihcar Bentaouzina in 2003/2004.
The showing will happen thursday august 11th 2005 at the Artliners, Gärtnerstrasse 23, 10245 Berlin.
Doors open at 8pm and the film will be screened at 9.30pm.

I haven't spend as much time in the studio as I used to. It's nice taking a break from the music and get outside, see some people and experience that strange luminous ball in the sky that burns my eyes and tans my skin. I see it so rarely. My studio is a cave in which I can hide. The walls are dark and sunlight only enters here for about an hour every morning.
I have however found time to record some grooves for the 'Constructions' album. Bassist Mikkel Paaske visited the studio the other day and laid down some electric and double bass on the tracks 'Drown' and 'Kite'. 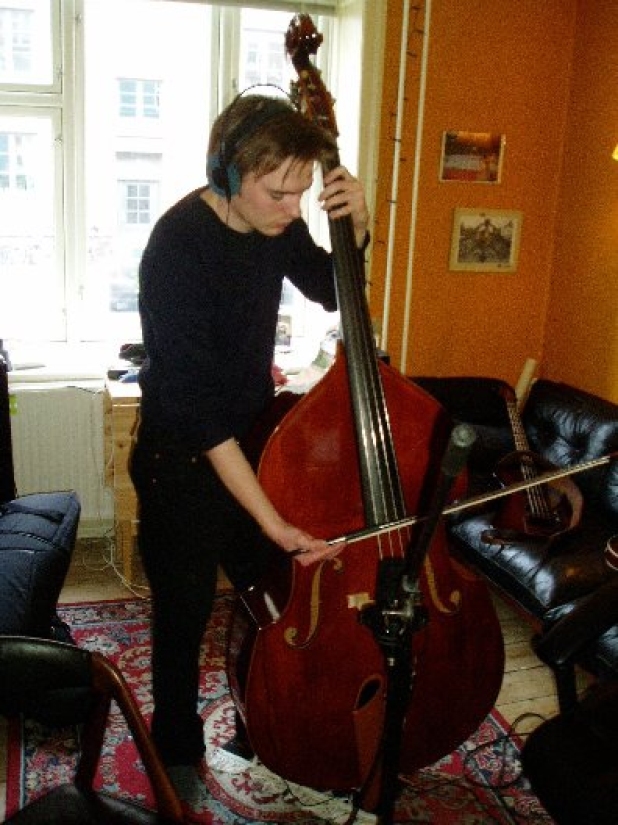 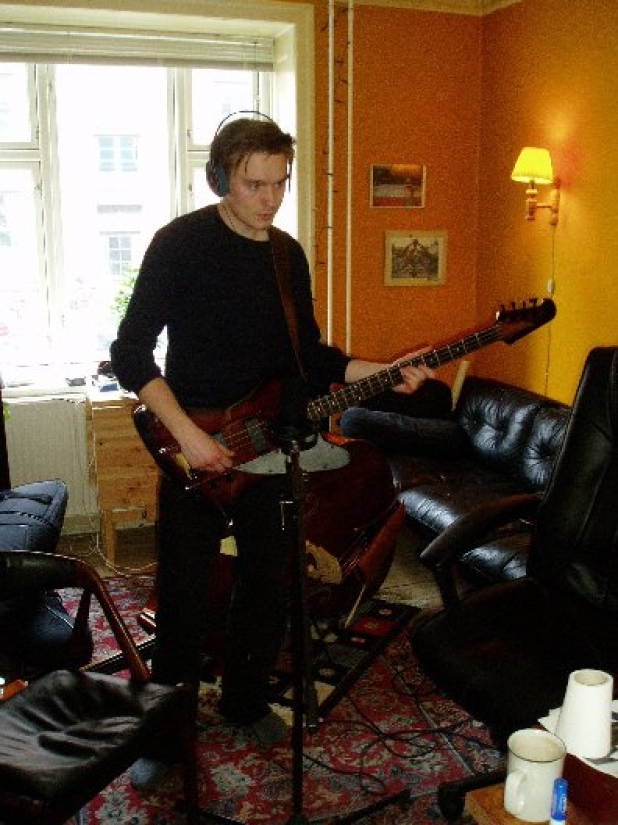 The new album from ENTAKT is coming along. 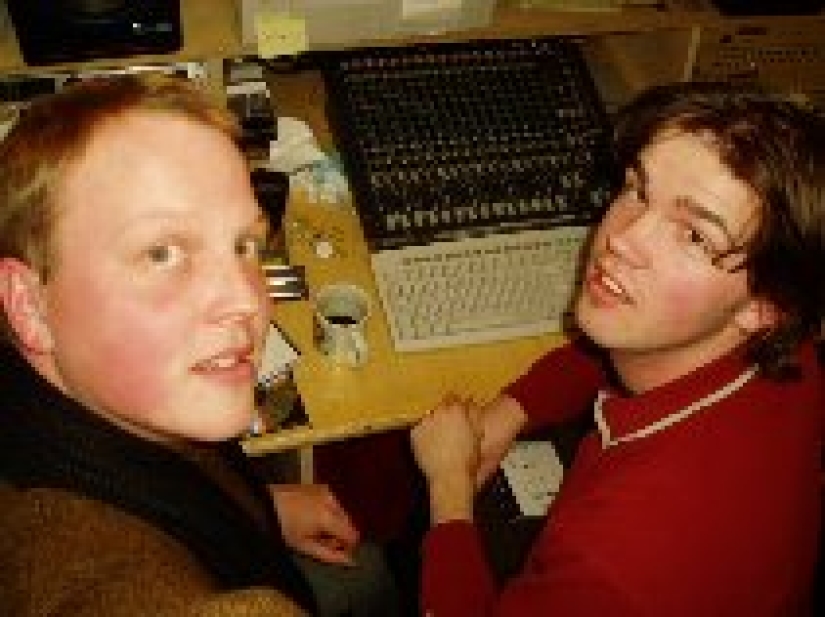 I have recently spend time in Nicolai's (the keyboard player) studio, AdSono mixing some tracks from the forthcomming album. To say the least this album is good - really good! It's the classic Entakt sound from the two first album, but this time with teeth. The depth of the music is astonishing.... Just you wait and hear..... magic has happened at 'tænkeboksen'....

Six months ago I wrote that I was in the studio mixing some new Entakt songs.
Now one of these, 'Vi ville synge verden en opsang', has climbed to the top of Danish Radio's chart.
It's a bit strange to see a song that I assisted the mixing of in the chart. Congratulations Entakt, you've really deserved it!

Looking back on what I wrote last year, and realizing that I only accomplished a little part, it would be plain stupid to have any resolutions this new year...

However I can tell you a bit about what I'm working on at the moment. I'm hard at work in my studio recording a new album with the working title 'Constructions'. The work is progressing very well, and will feature a couple of guests. Of these I can mention the percussionist from Entakt, Martin Jørgensen who has been banging on an old gas radiator and a selfmade chimes set... Here's a few snapshots from that session: 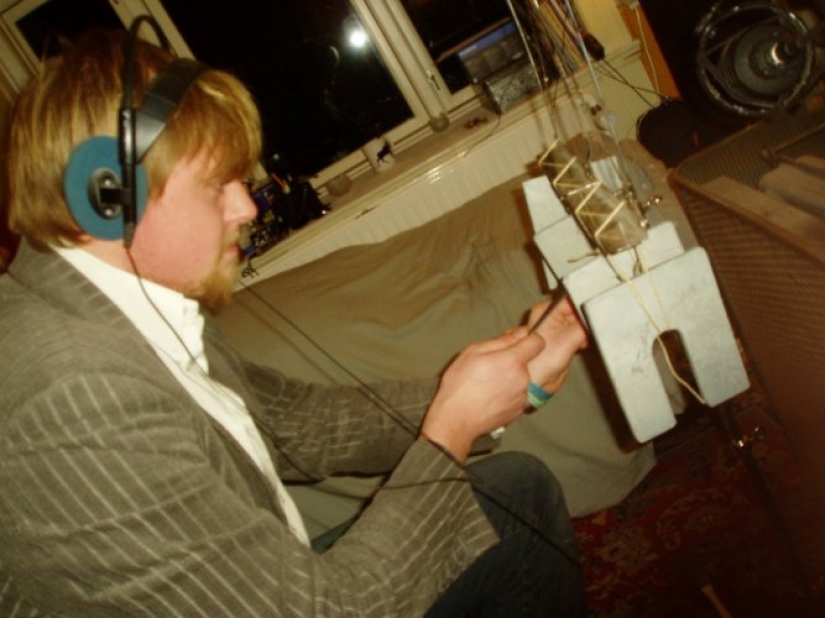 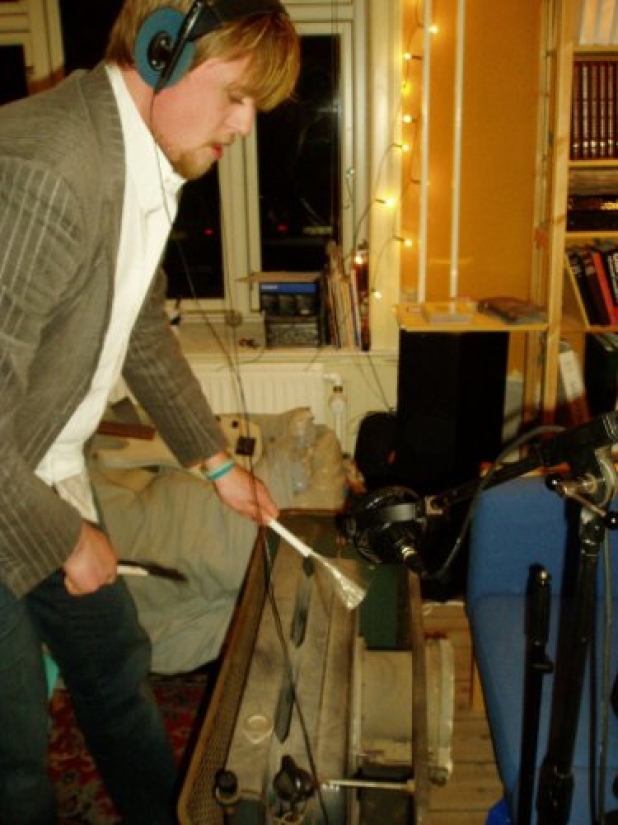 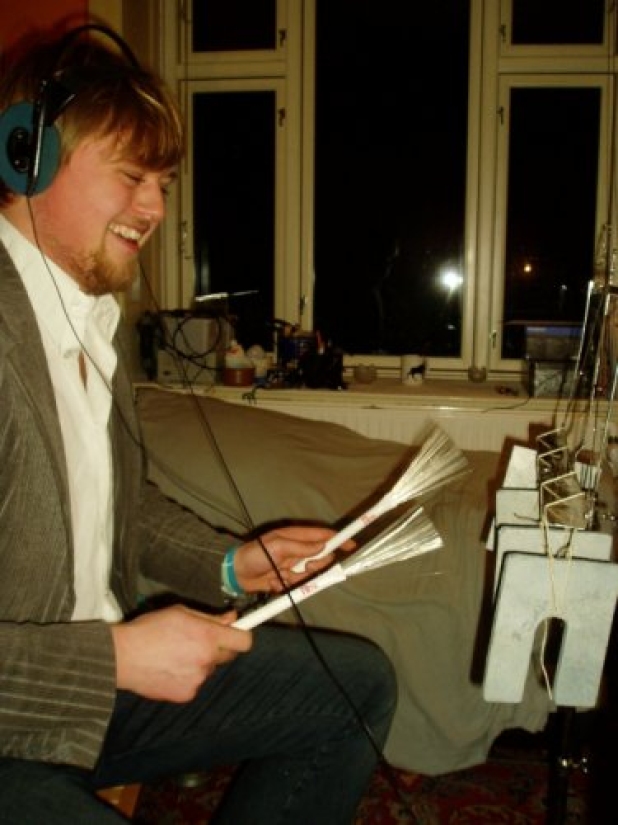 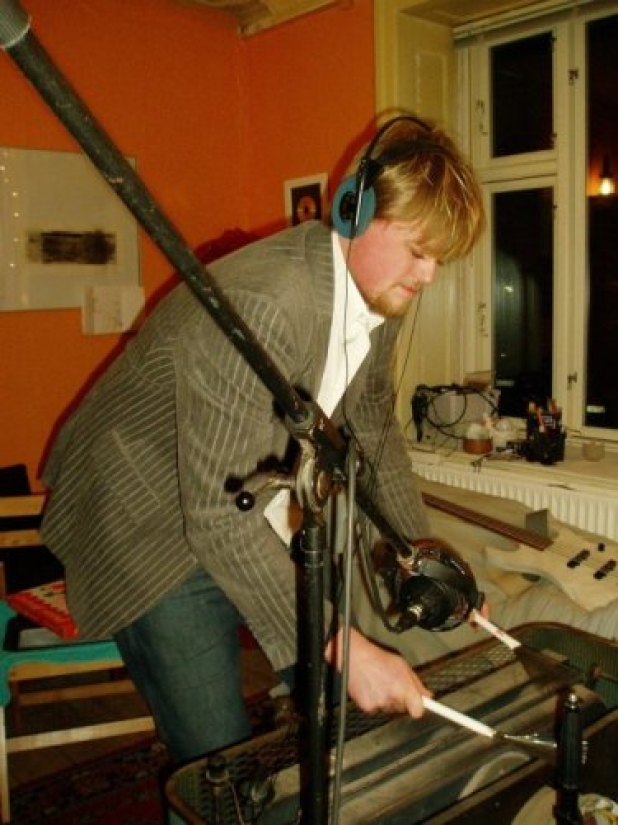 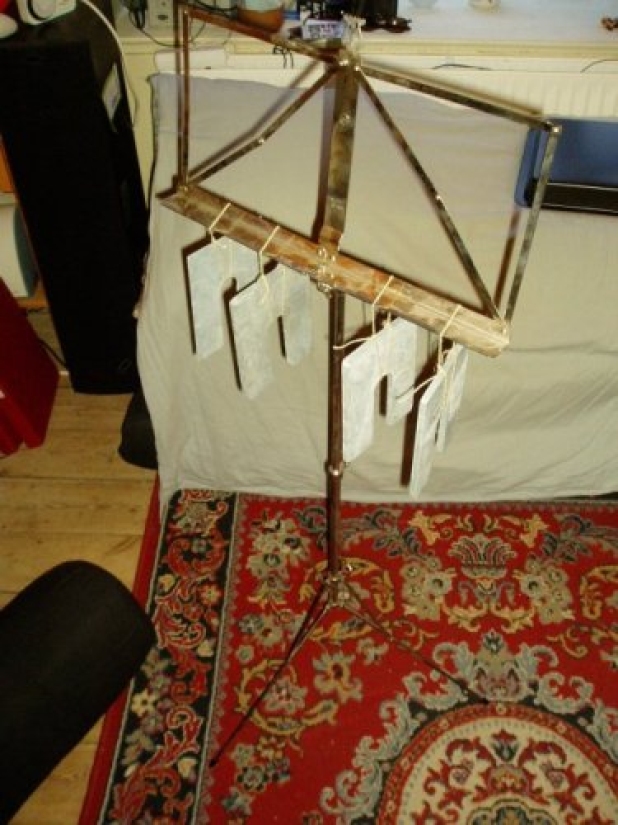