Captured on a mild november night i 2017, 'A Physical Presence' showcase Ste van Holm & Friends' live performance in front of an unxepecting, but enthusiastic crowd.
Maybe not the best performance by this band, but certainly the best interaction between performers and audence.

I was supposed to perform my album 'Thaw' live in concert, but because of 2020, everything was canceled.

Here's a preview of what should have been.

The footage is from Kangeq, a deserted village 20 minutes by boat away from Nuuk, Greenland.

I've always felt a weird attraction to unpublished albums, and I've felt a thrill when they were finally made available. For me, the king of the 'secret' albums is Jean-Michel Jarre's 'Music for Supermarkets' from 1983 and I'm still eagerly awaiting its publication. For years there were speculation about an album by The Alan Parsons Project called 'The Sicilian Defense' that was kept in the record company's vault, never to be released. It was finally released a few years ago, and it is not a good album. I bought it straight away anyway. Aphex Twin talked for years about hours and hours of unpublished music, some of it saw the light of day on SoundCloud a few years ago. And then there's 'The Big Spliff' from Pink Floyd, that sort of was released as 'The Endless River' after 20 years in the vault.

I have also created music that was not meant for publication. Most prominent are two albums created ten and fifteen years ago, pressed in VERY limited numbers and only given to friends and collegues.
Until today.
Without thinking too much about it, I've uploaded these two albums to BandCamp and can now be enjoyed by everyone - if you'd like to.
The music is experimental - very off piste - and wasn't meant to be anything but sonic explorations.

But here they are:

German magazine Empire has posted a review of 'Thaw' 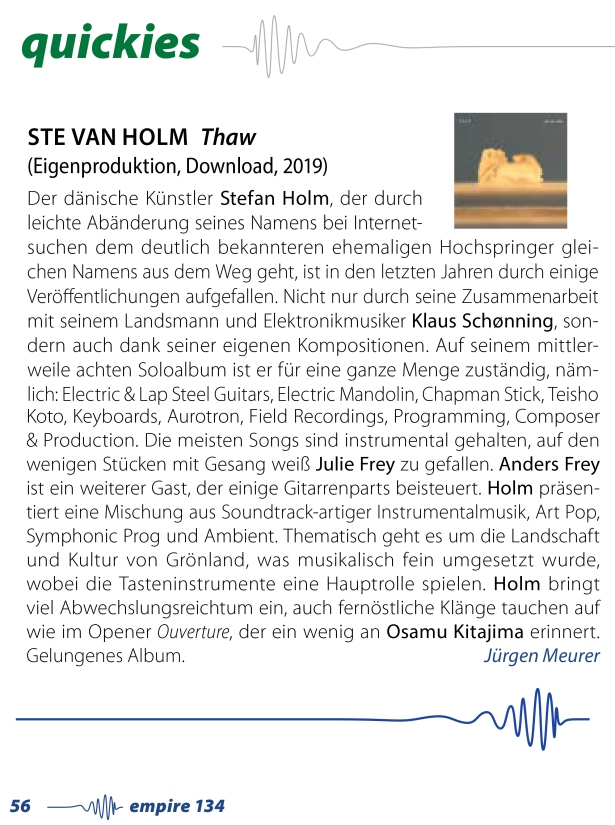